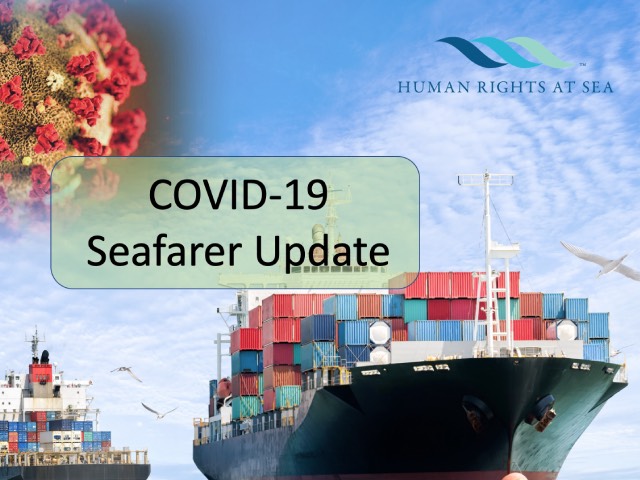 “Please note as of date there are 9 crew members overdue for relief who are fatigued both mentally and physically, and under enormous psychological pressure to safely execute their shipboard responsibilities.”

London. UK. A steady stream of contact from concerned seafarers continues to flow into the UK charity, Human Rights at Sea. In the majority of cases, the issues being raised are ones being communicated to highlight facts and concerns which seafarers feel are being under-reported rendering them invisible and without a voice. Notably, virtually all seafarers who communicate with the charity do not want to be identified due to their worries about retribution for speaking up.

The common threads of concern focus around individual and crew mental exhaustion, safety onboard, concern about being stranded, and being unable to get home to support their families.

A Second Engineer currently onboard an oil tanker contacted the charity and commented [Bold text by HRAS]:

“[The] Problems faced during these times are especially signing off as there are [is] no provision provided to the 1.6 million seafarers during these extraordinary times who have completed their tenure and are mentally and physically tired to complete their obligations and then go home peacefully.”

“It is imperative to stay at sea longer as the business aspect of the global economy needs to run so that essential items are being delivered to the people at home… [while the] length of the extension is subject to 3 things, one the country where the vessel is going its flight must be active, two the home country of the seafarer flight should be active and 3rd the reliever who is to be flown from his home country should also have active flight status. The mental and physical condition of the seafarer starts to degrade once the completion of tenure arrives as working on board requires you to be fully aware of the situation and act accordingly.”

“My contract duration is for 4 months but its already 6 months wherein I am still onboard due to the Covid situation. [My] biggest concern is about the family at home, as during these difficult times they have to do all the activities at home without any help from us. [The] worst case scenario if someone at home is infected and I am there at sea it is not possible for me to do absolutely anything for my family which is a scary thought. Since the ship is the safest place at the moment when at sea, but when at port there is a high probability of shore staff entering the vessel and infecting the crew is a great concern at the moment.”

An Indian Master contacted the charity to highlight that despite over-running their employment contracts, the crew will be sailing past their home State to reposition via South Africa with an indication of continuing onwards to the east coast of South America. If disembarked in South Africa, the crew are worried they can not return to their families under the current COVID-19 restrictions.

“My officers and crew are mentally exhausted and depressed thinking of the reality, what future holds for them if vessel goes past the Indian coast.”

“Please note as of date there are 9 crew members overdue for relief who are fatigued both mentally and physically, and under enormous pyschological pressure to safely execute their shipboard responsibilities.”

CEO of Wallem Group, Frank Coles, continues to vocally advocate for crew relief, recently being reported in Tradewinds [Paywall] as highlighting that ‘that shipping’s crew change crisis is putting some seafarers under so much stress that they are close to breaking point’, while Human Rights at Sea is seeing messaging groups on social media starting to call for onboard strikes.