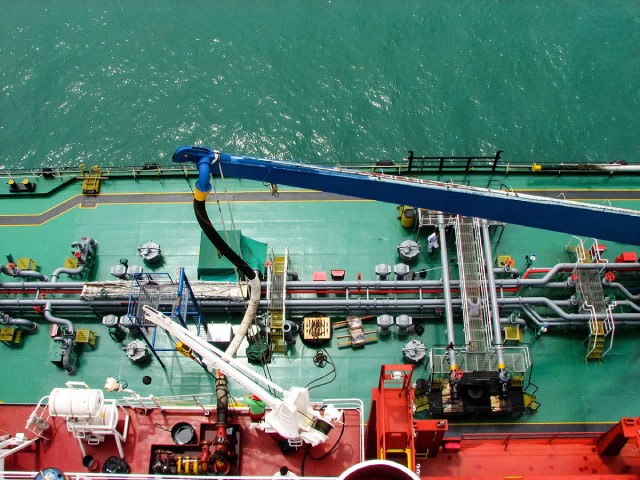 The selloff in oil prices this month has pushed price for the mainstay Singapore-delivered Marine Fuel 0.5% bunker down 28.88% to average $355.54/mt so far in March as compared to $499.9/mt in February, Platts data showed.

The sharp drop encouraged shipowners to rush in to buy short term supplies. And many are now exploring longer term contracts.

“I covered most of my LSFO requirements with term contracts for Q1 and Q2 but now I am going to see if I can cover my term for Q3 and Q4 too,” a shipowner said.

A dwindling flat price has also enticed ship owners to not just consider locking in longer term contracts, but also volumes for April, and for high sulfur bunker fuel as well, said traders.

“I am hearing a few fixed price contracts for high sulfur bunker fuel into April…flat price is pretty weak, might be good to lock in some bunker costs,” a Singapore-based bunker trader said.

The incentive to secure additional short- and longer-term volumes at these low flat price levels is compelling to some of the ship owners who apparently already have contractual volumes with suppliers that they haven’t been able to lift fully due to a demand slump from the coronavirus outbreak.

“We still have inventories, but I think prices are attractive enough for us to procure some [more] spot and term volume,” said another shipowner.

NOT ALL ARE BUYING THOUGH

Even as a good number of shipowners have said they are looking to take the fixed price term contract route, there are some that are skeptical to opt long term sourcing of bunker fuel on a fixed price basis.

The naysayers among shipowners hold a view that the worst with respect to a drop in flat price is perhaps yet to come.

“How can I take a [fixed price] contract knowing there’s a potential that crude could see new lows? It could go terribly wrong,” a Singapore-based head of bunker procurement at one of the largest dry bulk shipping companies said.

Meanwhile, some shipowners were still evaluating their options between taking a fixed price route or on a floating price basis.

“We are trying to see if that’s possible, but on the other hand the discounts to conclude contracts on a floating [price] basis have also widened, so we’re looking at both options,” said a fourth shipowner.

According to traders and shipowners, suppliers are currently looking to tie up Q2 volumes for Singapore-delivered Marine Fuel 0.5% bunker at a discount in the high teens to Singapore gasoil 10 ppm. This compares to a premium of $50-$60/mt at which term volumes were concluded at for Q1 delivery.

Singapore-delivered Marine Fuel 0.5% spot differential to Singapore gasoil 10 ppm cargo has averaged a discount of $19.49/mt so far this month as compared to a premium of $8.44/mt in February and a premium of $88.87/mt in January, Platts data showed.

NOT ALL ARE SELLING EITHER

Some of the suppliers who held a view that shipping fuel demand would improve as global trade claws back to normalcy from the aftermath of coronavirus outbreak going into the second half of the year, were said to be less eager to ink contracts at prevailing low levels, said traders.

This was especially true apparently in the case of tier-2 traders and bunker suppliers who don’t want to, or have the appetite to, take on risk management positions to hedge their fixed price physical exposure.

“We got some inquiries from buyers…we also have some other traders asking us, but we are not so keen,” said one such Singapore-based trader about their reluctance to tie up fixed price-based term contracts.

Major suppliers have been less reluctant though, with a few heard to be approaching shipowners to tie up contracts on a fixed price basis.

“Oil majors and most major traders [now] have presence in the delivered [bunker] market, so they will be able to offer [basis] fixed price as they can hedge their physical exposure,” said a Singapore-based senior trader at a western trading company.