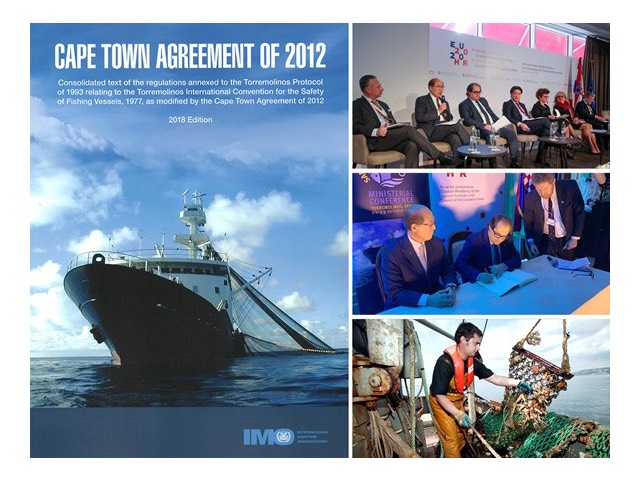 The entry into force of IMO’s Cape Town Agreement on fishing vessel safety will be crucial for improved safety at sea for fishers and will support the fight against illegal, unreported and unregulated fishing. During a European Union High-level Ministerial Maritime Conference in Opatija, Croatia (10-11 March), participants including IMO Secretary-General Kitack Lim highlighted the urgent need to bring the Cape Town Agreement into force.

During the event, further momentum towards this goal was seen, with three more States (Bulgaria, Poland and Portugal) signing the “Torremolinos Declaration” – under which States publicly indicate their determination to ratify the Cape Town Agreement by the tenth anniversary of its adoption (11 October 2022), and to combat illegal unreported and unregulated fishing.

The Torremolinos Declaration was opened for signature at IMO’s October 2019 conference on fishing vessel safety in Torremolinos, Spain, and has now reached 51 signatories.

The Cape Town Agreement outlines regulations designed to protect the safety of crews and observers and provides a level playing field for the industry while setting standards for fishing vessels of 24 meters length and over.

The treaty will enter into force 12 months after at least 22 States, with an aggregate 3,600 fishing vessels of 24 meters in length and over operating on the high seas have expressed their consent to be bound by it. To date, 14 countries have ratified the Agreement. The entry into force is expected to improve safety at sea in the fisheries sector worldwide. It will also be a useful tool in combatting illegal, unreported and unregulated (IUU) fishing and reducing pollution from fishing vessels, including marine debris.

”First of all I would like to express my gratitude to the Croatian EU Presidency for organizing this High-level Maritime Meeting in Opatija and setting as priority the signing of the Torremolinos Declaration. This ceremony undeniably is an important step for further strengthening of maritime safety and fair competition. Bulgaria, being a participant in the elaboration of the Torremolinos International Convention for the Safety of Fishing Vessels, 1977 and the 1993 Protocol strongly expresses its continued concern about the improvement of the safety of fishing vessels.”

“As in the past the Republic of Poland is committed to continue fighting against IUU fishing therefore Poland is delighted to have signed the Torremolinos Declaration in Opatija yesterday, following our recent announcement that we have also embarked on the ratification of this important Convention. It’s implementation will help to protect safety of fishing vessels and fishermen in international waters, and will provide other assistance for our fishing industry. We are very grateful to Croatia for helping to prioritise it at this import meeting of Maritime Ministers during their EU Presidency”