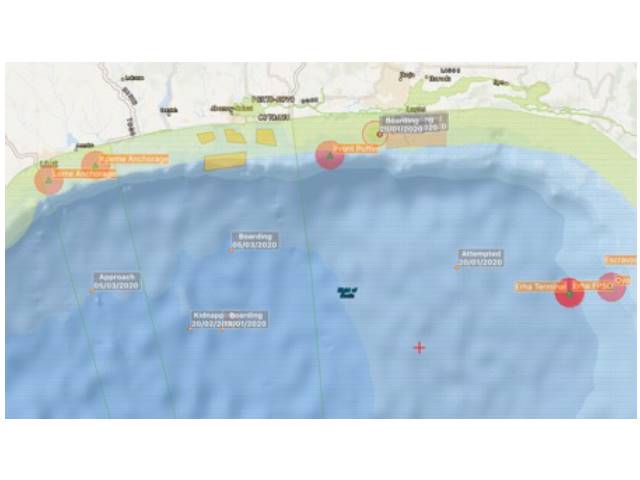 Reporting indicates that the Cargo vessel HUANGHAI GLORY has sent an alert by SSAS for Piracy/armed attack. It is understood that the management of the vessel has not able to get in touch with the vessel since the initial incident report.

An unknown number of perpetrators are understood to have boarded the vessel. Currently, the vessel is drifting, with 23 crew members on board believed to be Chinese nationals. Nigeria Navy has been informed and has dispatched a vessel to investigate.

This is the third incident to be reported within 24hrs in close proximity. The last reported incident was recorded as boarding of the MT MINERVA VIRGO 45nm South Cotonou, occurring 5hrs prior. This incident its self followed another approach of a vessel 50nm South Lomé. In the first incident, the vessel reported being approached by a skiff containing 9-10 persons. In the second incident, the vessel was believed to have been boarded by 5-6 persons. It is assessed as highly likely that the perpetrators of all three incidents are the same grouping and are highly likely to have originated from within Nigeria.

Since 2019 there has been an increase in maritime security incidents involving vessel boarding and kidnappings within the waters off Togo and Benin but also a slight increase in incidents beyond the generally accepted heart of Nigerian piracy within the Niger Delta area. This is, in part, assessed to be due to the increased risks facing perpetrators within the Nigerian EEZ as a result of enhanced security coordination and the increasingly prevalent use of Security Escort Vessels. This is combined with an effective lack of coordinated security measures beyond the Nigerian EEZ has led to perpetrators to travel further in search of high yield targets.

In this particular incident, it is highly likely that the perpetrators sought to target a vessel whilst in transit to their original location.