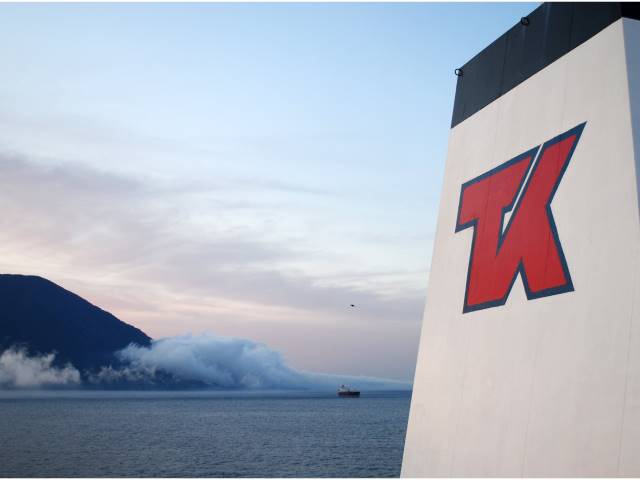 Teekay Corporation (Teekay or the Company) (NYSE:TK) today reported results for the fourth quarter and year ended December 31, 2019.  These results include the Company’s two publicly-listed consolidated subsidiaries, Teekay LNG Partners L.P. (Teekay LNG) (NYSE:TGP) and Teekay Tankers Ltd. (Teekay Tankers) (NYSE:TNK) (collectively, the Daughter Entities), and all remaining subsidiaries and equity-accounted investments. Teekay, together with its subsidiaries other than the Daughter Entities, is referred to in this release as Teekay Parent.  Please refer to the fourth quarter and annual 2019 earnings releases of Teekay LNG and Teekay Tankers, which are available on Teekay’s website at www.teekay.com, for additional information on their respective results.

“The fourth quarter of 2019 marked a return to profitability for Teekay, as we recorded consolidated adjusted net income of $31 million, or $0.31 per share, and saw our total adjusted EBITDA increase by approximately $113 million, or 53 percent, from the same period of the prior year, excluding the contribution related to our equity interest in Altera Infrastructure, which was sold in May 2019.  The increase can be attributed to higher earnings from Teekay Tankers as a result of significantly stronger spot tanker rates during the quarter, from Teekay LNG as a result of the delivery and contract commencement of various growth projects, and from our three directly-owned FPSO units, combined with lower general and administrative expenses across the group,” commented Kenneth Hvid, Teekay’s President and CEO.

“We have continued to execute on our strategic priorities that were laid out at our recent Teekay Group Investor Day,” Mr. Hvid continued. “Teekay LNG has now completed its growth projects, which are expected to provide significant earnings and cash flow growth in 2020, while continuing to delever its balance sheet and returning capital to unitholders. Teekay Tankers took advantage of the strong tanker market and fixed out four Suezmax tankers at attractive levels and secured a new five-year, $533 million revolving credit facility, while also continuing to delever its balance sheet with significant cash flows from the strong spot tanker market and the proceeds from opportunistic asset sales. Taking into account the operating cash flows generated in the fourth quarter of 2019 and the impact of agreed asset sales, Teekay Tankers’ proforma net debt(1) has decreased by approximately $153 million, or 15 percent, since the end of the third quarter of 2019.”

Mr. Hvid added, “Looking ahead to 2020, we expect to continue to build balance sheet strength across the group and, despite the recent market volatility and the uncertainty on the impacts of the coronavirus, we expect our cash flows and earnings to be stronger in 2020 compared with 2019.  By virtue of Teekay LNG’s current 97 percent fixed employment in 2020 and 92 percent in 2021 for its LNG fleet, we are well-insulated from the current weak spot LNG shipping market, and we expect to continue benefitting from these stable cash flows.  Meanwhile, we believe Teekay Tankers’ attractive operating leverage and ongoing balance sheet delevering, position us for increased tanker cash flows on the back of positive underlying tanker supply and demand fundamentals in the medium-term.”

The Company’s consolidated results during the quarter ended December 31, 2019 increased compared to the same period of the prior year, primarily due to: higher average spot tanker rates earned by Teekay Tankers in the fourth quarter of 2019; higher earnings in Teekay LNG in 2019 due to the delivery and contract commencement of several newbuildings during the past year, as well as higher revenues earned from certain existing LNG carriers and multi-gas vessels; and lower corporate general and administrative expenses incurred in 2019.

In addition, lower losses on derivatives in 2019 also contributed positively to our GAAP net income in the three months ended December 31, 2019 compared with our GAAP net loss in the same quarter of the prior year.

Total adjusted EBITDA(1) in the fourth quarter of 2018 included $35.0 million related to Teekay Parent’s ownership interest in Altera, which was sold in the second quarter of 2019.

Total Teekay Parent Free Cash Flow(1) was $4.9 million during the fourth quarter of 2019, compared to negative $11.0 million for the same period of the prior year, primarily due to: lower net interest expense(1) due to the repurchase of unsecured bonds over the past year and the bond refinancing completed in May 2019; higher contribution from the Petrojarl Banff FPSO unit due to higher oil price-linked revenue and lower maintenance costs; lower operating costs related to the Sevan Hummingbird FPSO unit; lower corporate general and administrative expenses incurred in 2019; and a 36 percent increase in Teekay LNG’s quarterly cash distribution commencing in the first quarter of 2019.  Please refer to Appendix D of this release for additional information about Teekay Parent’s Free Cash Flow(1).

In addition, GAAP net income was positively impacted in the three months ended December 31, 2019, compared to GAAP net loss for the same quarter of the prior year, by various items, including lower losses on derivatives in 2019.  These increases were partially offset by lower equity income in 2019 due to the sale of Magnora ASA (Magnora), formerly Sevan Marine ASA, in the fourth quarter of 2018 and the sale of Teekay Parent’s remaining interest in Altera in May 2019.

Teekay LNG’s adjusted net income and total adjusted EBITDA(1) for the three months ended December 31, 2019, compared to the same quarter of the prior year, were positively impacted by: the deliveries of two wholly-owned LNG carrier newbuildings (the Sean Spirit and Yamal Spirit) between December 2018 and January 2019; higher earnings from the Torben Spirit LNG carrier upon redeployment in December 2018 at a higher charter rate; higher spot revenues for seven multi-gas carriers and higher charter rates earned in Teekay LNG’s 50 percent-owned joint venture with Exmar NV during the fourth quarter of 2019; the deliveries of four joint venture ARC7 LNG carrier newbuildings between June and December 2019; the delivery of one joint venture LNG carrier newbuilding in January 2019; and higher earnings from Teekay LNG’s 52 percent-owned joint venture with Marubeni Corporation as a result of the one-year charter contracts for two joint venture LNG vessels, the Arwa Spirit and Marib Spirit, that were secured at higher rates in June and July 2019, respectively, and a decrease in off-hire days for certain LNG carriers.

These increases were partially offset by the sale of four conventional tankers, the African Spirit, European Spirit, Toledo Spirit and Alexander Spirit, between October 2018 and October 2019.

Please refer to Teekay LNG’s fourth quarter 2019 earnings release for additional information on the financial results for this entity.

Teekay Tankers’ net income, adjusted net income(1), and total adjusted EBITDA(1) for the three months ended December 31, 2019 significantly increased compared to the same period of the prior year, primarily due to higher average spot tanker rates earned in the fourth quarter of 2019.

In January 2020, Bahrain LNG W.L.L. (BLNG), in which Teekay LNG owns a 30 percent interest, announced that it had completed the mechanical construction and commissioning of the Bahrain Regasification Terminal (Terminal) and that the customer had commenced payments to BLNG under its 20-year terminal use agreement.  BLNG also reported that the customer is looking forward to the commencement of commercial operations of the Terminal. The Bahrain Spirit FSU (which is 100 percent-owned by Teekay LNG) continues to be chartered to BLNG.  Depending on the seasonal requirements for regasification services by the Terminal, BLNG may trade the Bahrain Spirit FSU in the short-term LNG shipping market. Regardless of the deployment strategy utilized by the customer, BLNG will receive its full contractual payments from the customer of the Terminal, and Teekay LNG will continue to receive its full, fixed-rate charter-hire for the Bahrain Spirit FSU from BLNG.

In January 2020, Awilco fulfilled its obligation to repurchase two of Teekay LNG’s LNG carriers, Wilforce and Wilpride, for a total of over $260 million. Teekay LNG received net cash proceeds of over $100 million after the repayment of approximately $157 million of debt secured by these two vessels.

Since November 2019, Teekay Tankers has entered into agreements to sell three 2003-built and one 2004-built Suezmax tankers in separate transactions for combined sales proceeds of approximately $78 million. The first three vessels were delivered to their respective buyers between December 2019 and February 2020, with the fourth vessel expected to be delivered in April 2020.

In December 2019, Teekay Tankers entered into a one-year charter-out contract for a Suezmax tanker at approximately $36,000 per day, which commenced in December 2019.

In January 2020, Teekay Tankers reached an agreement to sell a portion of its oil and gas ship-to-ship transfer support services business, which also provides gas terminal management and gas consulting services, for approximately $26 million. The sale is expected to close late in the first quarter of 2020 or early in the second quarter of 2020. Teekay Tankers will retain its entire Full Service Lightering business that operates in the U.S. Gulf, which provides ship-to-ship oil transfers for both U.S. crude imports and exports. In addition, Teekay Tankers will continue to operate oil ship-to-ship transfer support services in North America and the Caribbean, a business that has synergies with its core Full Service Lightering business.