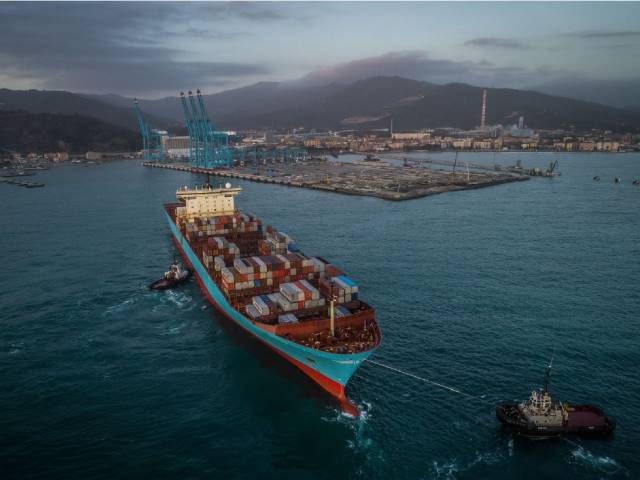 The new Vado Gateway terminal, located in Vado Ligure, Italy, received its first commercial service on 11 February 2020. The ship, M/V Maersk Kota, was the first of seven ships from Maersk’s weekly ME2 service, connecting the Mediterranean with the Middle East and India.

The call by M/V Maersk Kota marked the start of operations for the new deep-sea Vado Gateway container terminal. With a total investment of 450 million euros, it is one the most important port infrastructures to be built in Italy in recent decades. Managed by APM Terminals Vado Ligure, the new container terminal strengthens the competitiveness of the Italian port system and represents a strategic hub for the new “Silk Road”, connecting the markets of Northern Italy, Switzerland, Germany and north-eastern France with the Far East.

With a capacity of over 6,400 TEUs, M/V Maersk Kota departed from the port of Tangier in Morocco and arrived at Vado Gateway after the port calls at Alcegiras, Valencia and Fos Sur Mer / Marseille. It continued its journey to Port Said in Egypt and various other terminals in Saudi Arabia, Oman and the United Arab Emirates, and finally Abu Dhabi.

Once unloading operations have been completed, containers will continue their journey by road or rail. The terminal operates a truck appointment system to limit turn times to a minimum and ensure maximum efficiency. Rail connections from Vado Ligure include the inland terminals of Pioltello (Milan), Rubiera (Modena) and Padua. Export activities also benefit from this new service, with containers arriving from all over Northern Italy, both by road and by rail.

Maersk’s MMX service, connecting the Mediterranean and Canada, is scheduled for the beginning of March. The five ships engaged on this line, of approximately 2,500 TEUs each, will dock in Vado Gateway once per week.

“With the arrival of the first ship on the quay, Vado Ligure’s new deep-sea container terminal has officially commenced operations,” commented Paolo Cornetto, CEO of APM Terminals Vado Ligure. “After managing a number of challenges, being able to finally serve customers, is a dream for us. We will do everything necessary to ensure that Vado Gateway becomes synonymous with efficiency and customer service in the shortest time possible – ‘the port system most preferred by customers’”.