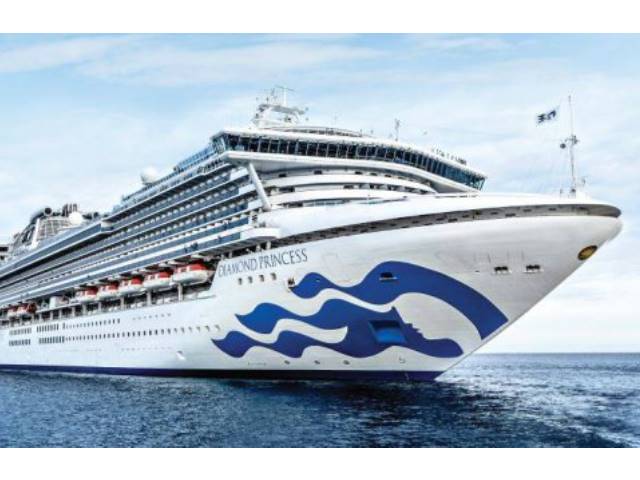 Dozens more people onboard a cruise ship quarantined in the port of Yokohama, Japan, tested positive for the coronavirus on Friday and thousands of passengers remained confined to their cabins, only allowed on deck briefly for fresh air.

The Diamond Princess, owned by Miami-based Carnival Corp , was placed on a two-week quarantine on arriving at Yokohama on Monday after a man who disembarked in Hong Kong was diagnosed with the virus.

Japanese Health Minister Katsunobu Kato told a news conference that 41 people on the liner had tested positive for coronavirus on Friday, bringing the total of confirmed cases to 61. Twentyone of the new cases were Japanese.

Those infected were taken off the ship and moved to hospitals in Tokyo and neighboring towns, the health ministry said. Blue and white tarpaulin sheets were hung up to screen them from the view of other passengers.

Operator Princess Cruises’ website describes the ship as “your home away from home” and it will remain so for most passengers at last until Feb. 19. The quarantine period could be extended if need be, a Japanese government official told a media briefing.

The 61 cases came from a sample of 273 people who had been tested because they had showed symptoms or been in close contact with those who did. More tests will be done if any more passengers developed symptoms, Kato said.

For the stranded passengers, who were promised “a treasure trove of exceptional delights” in the ship’s brochure, the new infections spelled only more gloom.

Staff distributed thermometers and passengers were told that mental health experts were available for telephone consultations around the clock.

“We have instructions to monitor our temperatures and report if we’re above 37.5,” one man, a 43-year-old Hong Kong resident on the ship with his family, told Reuters.

Passengers were finding out about the new infections from the internet before they were announced on the ship, said the Hong Kong man, who declined to be identified.

Ashley Rhodes-Courter, an American whose parents are on the ship, said she hoped U.S. officials would be able to help her parents get off it.

“They are all breathing circulated contaminated air so they could be getting everyone infected,” Rhodes-Courter said.

The Japanese official said the government saw no risk of the virus being spread by the Diamond Princess’s ventilation system because transmission is not airborne. Rather it is spread by droplets from coughs or sneezes that can stick to surfaces and infect other people.

But Paul Hunter, an expert in infectious disease at Britain’s University of East Anglia, said the potential for cruise ships spreading the epidemic across the world was now becoming a serious concern.

“Cruise ships are environments where respiratory infections can spread very quickly,” he said.

They also carry the further risk of transmitting a viral infection to other countries as passengers embark and disembark.

“I would be surprised if we don’t see more problems with cruise ships in the coming weeks,” Hunter said.

Transport Minister Kazuyoshi Akaba told reporters Japan had asked another cruise ship, the Westerdam, not to make a port call in the country.

The governor of the U.S. island territory of Guam, in the Pacific Ocean, earlier on Friday rejected a U.S. State Department request to allow the Westerdam to dock there.

The new ship cases take the total number of coronavirus infections in Japan to more than 80, according to Reuters calculations. Health Minister Kato said Japan was not including those cases in its national count, which stands at 21.

The outbreak, which has killed almost 640 people in mainland China and two elsewhere, has also stoked concern about the Tokyo 2020 Olympics, which begin on July 24.

Games organizers have set up a task force to coordinate with health authorities on how to respond to the epidemic.