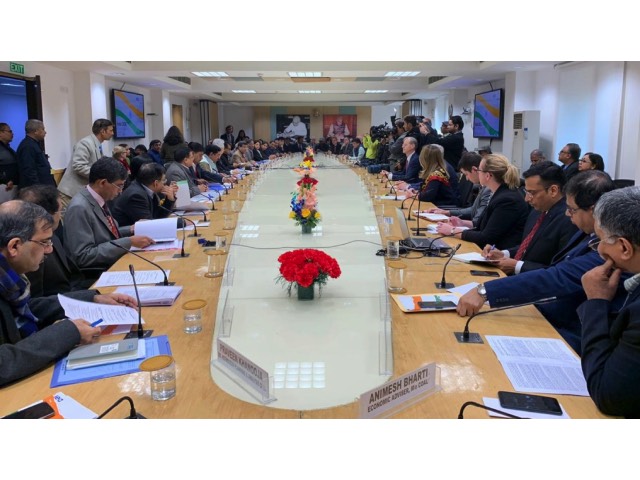 With a population of 1.4 billion and one of the world’s fastest-growing major economies, India will be vital for the future of the global energy markets. The Government of India has made impressive progress in recent years in increasing citizens’ access to electricity and clean cooking. It has also successfully implemented a range of energy market reforms and carried out a huge amount of renewable electricity deployment, notably in solar energy.

Looking ahead, the government has laid out an ambitious vision to bring secure, affordable and sustainable energy to all its citizens. This in-depth review aims to assist the government in meeting its energy policy objectives by setting out a range of recommendations in each area, with a focus on energy system transformation, energy security and energy affordability. The review also highlights a number of important lessons from the rapid development of India’s energy sector that could help inform the plans of other countries around the world.

The report highlights the achievements of India’s energy policies and provides recommendations to support the government’s goals of promoting well-functioning energy markets and boosting deployment of renewables.

The IEA regularly conducts in-depth reviews of energy policies for its member and association countries. This is the first review carried out for India, which has been an IEA association country since March 2017.

Introducing the report, NITI Aayog Special Secretary Shri. R.P. Gupta welcomed and commended the hard work of the IEA and said, “As India builds on the remarkable growth and development of its energy sector, this in-depth review will help the Government in meeting its energy objectives by setting out a range of recommendations in each energy policy area.”

NITI Aayog CEO Kant, who brought up the idea with the IEA to conduct the review, said: “With clear goals in place, the country is making great strides towards affordable, secure and cleaner energy for all its citizens. India is working hard to move towards its aspirations of transforming the energy sector”

“The IEA has the privilege of enjoying a close relationship with India. This first in-depth review of the country’s energy policies illustrates the value of our growing collaboration,” said Dr Birol. “The energy choices that India makes will be critical for Indian citizens as well as the future of the planet. This was demonstrated at the IEA’s 2019 Ministerial Meeting, which mandated the Agency to start consultations with India for a strategic partnership that could serve as a path to eventual membership, a game-changer for international energy governance.”

The IEA report congratulates the Indian government on its outstanding achievements in extending citizens’ access to electricity, affordable efficient lighting and clean cooking in record time through historic schemes like SAUBHAGYA, UJALA and UJJWALA, while pursuing energy market reforms and the swift deployment of renewable technologies. The report highlights the strong growth of renewables in India, which now account for almost 23% of the country’s total installed capacity. The review also found that energy efficiency improvements in India avoided 15% of additional energy demand, oil and gas imports, and air pollution as well as 300 million tonnes of CO2 emissions between 2000 and 2018.

India is becoming increasingly influential in global energy trends. The country’s demand for energy is set to double by 2040, and its electricity demand may triple, according to the IEA report. Indian oil consumption is expected to grow faster than that of any other major economy. This makes further improving energy security a key priority for India’s economy, the report says.

The IEA welcomes Indian government policies designed to conduct large-scale renewable energy auctions, open up coal mining to private companies, and promote access to oil and gas markets for foreign investors. The report offers a wide range of recommendations for reforms in support of India’s goal of promoting open and well-functioning energy markets in sectors such as coal, gas and electricity. These include building strong regulators to ensure non-discriminatory access, moving from state allocation to market pricing, and further rationalising energy subsidies.

In India’s renewables-rich states, the share of variable renewables in electricity generation is already above 15%, a level that calls for dedicated policies to ensure they integrate smoothly into the power system. NITI Aayog can play a strong role in working with the states to implement power sector reforms, advance grid integration, improve flexibility and coordinate energy policy decisions.

NITI Aayog Vice Chairman Dr Kumar emphasised that India’s energy goals cannot be achieved without strong coordination of policies and targets between central and state governments, notably on electricity market design and renewable targets, and that a stronger cooperation is therefore needed on these fronts.

Petroleum and Natural Gas Minister Pradhan said: “NITI Aayog is already preparing a National Energy Strategy, and I would like to propose an annual event where NITI Aayog and the IEA bring together global energy stakeholders to have structured energy dialogue. We look forward to engaging with the IEA on oil security and on helping India move towards a natural gas-based economy.”

Power and Renewable Energy Minister Singh congratulated the IEA and NITI Aayog for the launch of the report: “India’s energy policy is a global story. India has the largest unified power grid that operates in single frequency. India has moved from scarcity to surplus electricity over the past few years while implementing the largest and the fastest energy access and energy efficiency programmes in the world.”

The report will help India to design implementation strategies to achieve secure and sustainable energy access for its citizens.