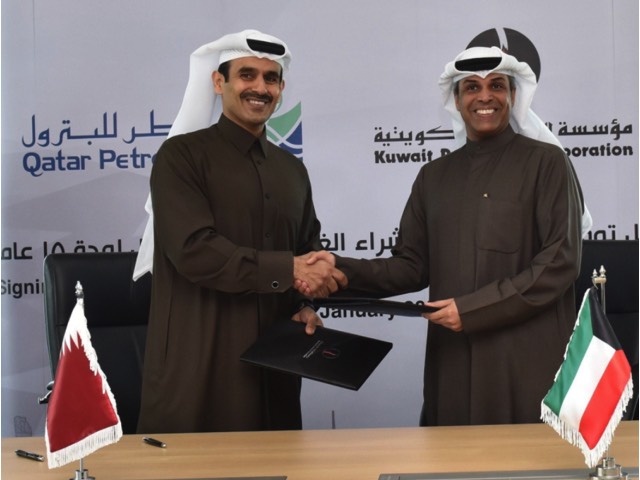 Qatar Petroleum and Kuwait Petroleum Corporation (KPC) entered into a long term Sale and Purchase Agreement for the supply of up to 3 million tons per annum of Liquefied Natural Gas (LNG) to the State of Kuwait.

His Excellency Mr. Saad Sherida Al-Kaabi, the Minister of State for Energy Affairs, the President and CEO of Qatar Petroleum welcomed the signing of the agreement and said, “We are pleased and proud to join hands with Kuwait Petroleum Corporation, and we look forward to providing reliable LNG supplies to our brothers in the State of Kuwait for decades to come.”

“This agreement extends Qatar’s long standing LNG supply relationship with Kuwait well into the 2030’s and highlights our commitment to meeting Kuwait’s LNG requirements. We are confident that the exceptional reliability of our LNG supplies will provide KPC with the required flexibility and supply security to fuel the State of Kuwait’s impressive growth,” His Excellency Minister Al-Kaabi concluded.

On his part, His Excellency Dr. Khaled A. Al-Fadhel, the Minister of Oil and the Minister of Electricity & Water, the Chairman of the Board of Kuwait Petroleum Corporation said, “The state of Kuwait is embarking on an ambitious path of economic growth, which requires cleaner energy sources such as natural gas that will contribute to reducing emissions and improving local air quality. Whilst KPC is working towards increasing local natural gas production, there remains a pressing need to secure imports of natural gas supplies.”