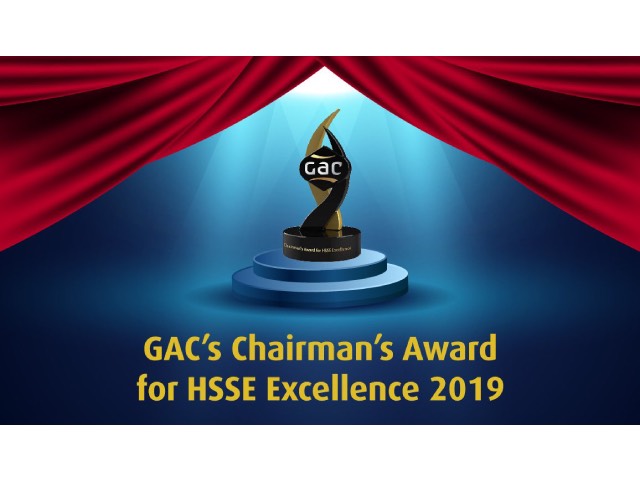 Mental health at work took centre stage for GAC’s Chairman’s Awards for HSSE Excellence 2019, with GAC UK being awarded the top prize for its campaign to raise awareness and take action when colleagues are struggling.

The company’s Mental Health Matters campaign was launched during Mental Health Awareness Week in May 2019. It kicked off with a video on the GAC UK QHSSE Teams forum, open to all staff, in which Managing Director Herman Jorgensen stressed the importance of a corporate culture in which mental health issues are recognised and can be discussed openly. This was followed up with posters in key office areas highlighting ‘5 Ways to Wellbeing’, and three members of staff underwent formal Mental Health First Aid training.

“Poor mental wellbeing, such as stress and depression, are among the top reasons workers in the UK take time off work sick,” says Jorgensen. “It makes sense, therefore, that our Health & Safety policies should focus on this as well as safety and physical health.”

Executive Group Chairman & Trustee and founder of the awards, Björn Engblom, says the GAC UK initiative was timely, and hopes to see action by other GAC companies to address wellbeing at work in the coming year. A USD 10,000 donation will be made to GAC UK’s charity of choice.

Energy efficiency & sustainability
The second prize was shared by two companies that have taken tangible steps to reduce their energy consumption:

Both companies will receive a USD 3,750 charity donation.

For the second year running, GAC Thoresen Logistics Thailand received a special commendation from the judges. This year, it was recognised for its programme to replace rubber tires on forklift trucks with polyurethane to reduce the amount of black carbon released in the air and soil.

Practical steps
The annual awards, now in their fifth year, aim to recognise and reward practical, effective steps taken by GAC companies to promote health, safety and security and reduce their negative impact on the environment.

Mr Engblom says this year’s winners and runners-up highlight the importance of sustainability in all its forms: “As a global organisation, we have to be aware of all aspects of our activities: environmental, commercial and – not least – human. By taking real practical steps to boost sustainability across all these areas, we aim to contribute to a healthier climate for our Group, our people and our customers.”