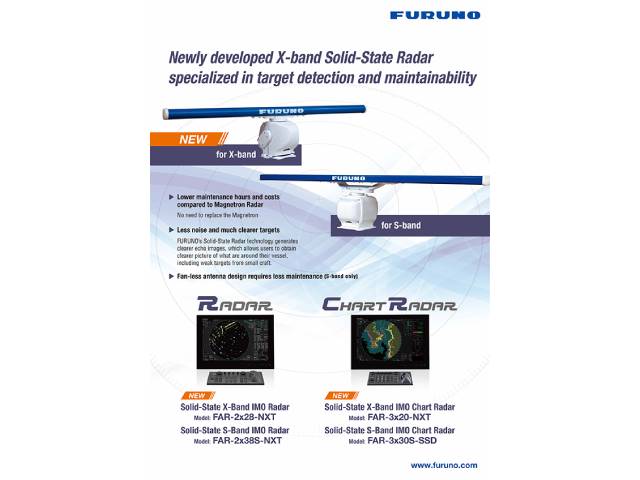 FURUNO ELECTRIC CO., LTD. (headquartered in Nishinomiya, Japan), presents its NEW 800W IMO Solid-State device X-band Radar/Chart Radar, and is able to offer, for the first time, a complete Magnetron-free Radar/Chart Radar Solution in both X-band and S-band with the addition of X-band models to the FAR-2xx8/3xx0 NXT Series from next summer (2020).

No magnetron means less power consumption and no consumable part, while maintaining the same level of performance thanks to a deep know-how in Solid-State technologies. In other words, Solid-State NXT Radars are both powerful and eco-friendly.

Solid-State is a technology that uses electronic components instead of a magnetron to generate microwaves. This technology consumes much less power, does not wear out and does not require any particular maintenance, significantly reducing operating costs. Finally, there is no pre-heating time and the start is much faster than with a magnetron.
In short, a Solid-State Radar is a more environmentally friendly Radar that requires less maintenance while delivering the same performance as its magnetron counterpart.