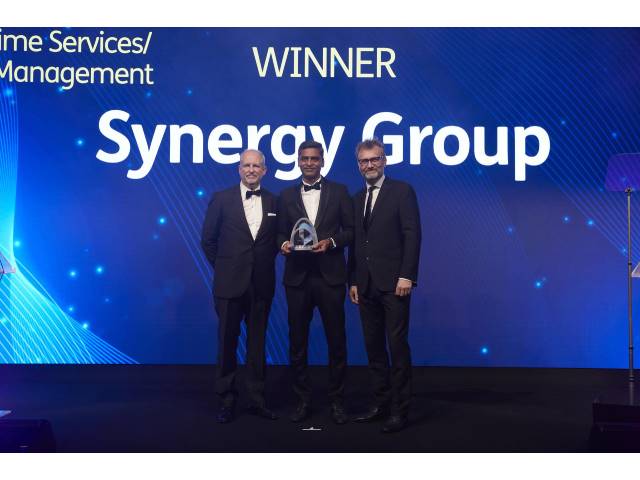 The Award recognises the achievements of the ship manager or agency which has demonstrably raised the standards of ship management over the previous year.

Synergy scooped the 2019 Lloyd’s List Excellence in Maritime Services & Ship Management Award which recognises the achievements of the ship manager or agency which has demonstrably raised the standards of ship management over the last year.

“Our panel felt that in a hugely competitive market it was the relative newcomer that was showing the old guard how to innovate and optimize operations for clients while also putting seafarer wellness, safety and training at the heart of the business,” the judges concluded.

Attending the event alongside Synergy Director, Capt. HS Swaminathan, was Mr. Rune Zeuthen, the recently appointed head of Synergy’s new Europe office, located in Copenhagen, Denmark. He thanked the judges and Lloyd’s List for recognising Synergy Group’s efforts over the last year during which Synergy moved up to sixth place in the rankings of the top ship managers in the world with a mixed fleet of 270+ vessels.

“I would also like to thank our customers for their continued support and appreciation of our approach to ship management metrics,” he added. “We make extensive use of Key Performance Indicators (KPI) so it is clear to everyone within Synergy and to our clients where we are excelling.

“For us, the important part of benchmarking lies in identifying where we can do better. This has been a critical factor in our achievements this year, particularly in Europe where we have been successfully attracting new clients.”

Judges of the 2019 Lloyd’s List Excellence in Maritime Services & Ship Management Award were asked to weigh the efforts and effectiveness of applicants across a range of performance indicators including “the welfare of crew, record of safety, environmental initiatives, support of training, a commitment to ensuring ship security, operational efficiency, innovation in cost control and a proven pattern of client satisfaction”.

In statements to judges a string of Synergy clients, all high-profile shipping executives, confirmed that on top of its excellent KPI performance on Lost Time Injury Frequency and ‘Unplanned Off-Hire’ over the last 12 months, Synergy’s top-class ship management services also included zero security and piracy incidents, and zero MARPOL (International Convention for the Prevention of Pollution from Ships) related violations.

The award also acknowledged Synergy’s initiatives aimed at improving crew welfare, safety and training. These included establishing a LARP (Look, Act, Report, Prevent) card system fleet-wide, upgrading and expanding state-of- the art training centres in Manila and Chennai and taking a string of gender equality initiatives. This saw a huge increase in female seafarers serving across the Synergy fleet over the last year during which the company also appointed its first female cadet to a gas carrier.

Judges made particular note of Synergy’s role in the establishment of a new wellness at sea helpline last year called iCALL, a nine-language service designed to reduce seafarer suicides and enhance the general mental health and wellness of all maritime personnel. The service is available 24/7, free of charge via phone, email and the chat-based nULTA App.

“Wellness, equality and simply treating people with respect are not add-ons at Synergy, they are core principles,” said Capt. HS Swaminathan. “We could not provide top-end services to our customers without all ‘Synergians’ buying into our vision of ship management excellence. Both at sea and on land they deserve recognition and respect.

“I would especially like to thank Synergy’s 11,000+ seafarers for showing the courage to face the challenges of seafaring day in and day out. This award is testament to their dedication and excellence.”

Synergy made a number of digital and technological advances over the last year which have proven hugely beneficial to clients. This included the further development of SMARTShip™, the patented digital shipping solution developed by Alpha Ori Technologies (AOT) which is now enjoying rapid uptake across the maritime sector. The Internet of Things (IoT) platform enables the operation of multiple systems on ships with varying degrees of autonomy. It has already been installed on more than 30 vessels and another 60 ships are undergoing the setup process.

“AOT has quickly emerged as an industry leader in the field of technology and digital shipping,” said Captain Unni, CEO and Founder of Synergy Group and Co-CEO of AOT.

Captain Unni also paid tribute to Synergy’s seafarers. “They make Synergy tick, I can’t thank them enough for their dedication and hard work all year,” he said.

“As for 2020, I can promise we’ll seek to raise ship management standards again. We will maintain our industry-leading unplanned off-hire and lost injury time rates because we understand what helps our customers most.

“However, it is our world class seafarer retention rates which facilitate the consistency of service excellence that allows us to perform so well on industry KPIs. Top of the agenda will be keeping our seafarers safe and well.”