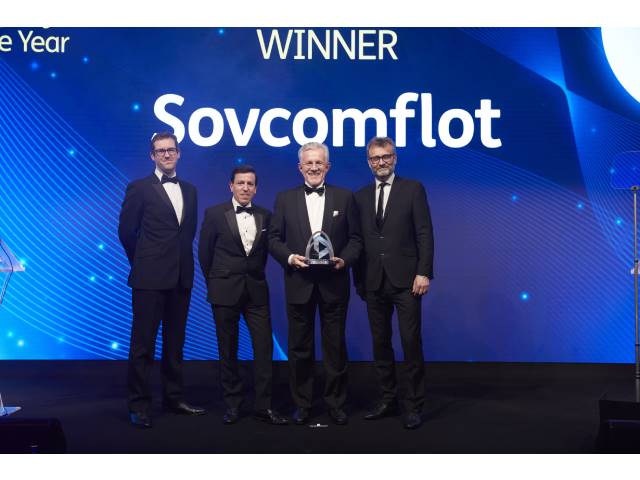 Sovcomflot (SCF Group) has won the award for ‘Company of the Year’ at the 2019 Lloyd’s List Europe Awards. The award ceremony was held in London on 10 December 2019.

The awards were attended by 400 industry professionals. Recipients are chosen from entries taken from around the European region and adjudicated by a distinguished judging panel, which included heads of classification societies, top-managers of shipping companies, maritime research institutions, international banks, shipping chambers and associations.

The award citation says that Sovcomflot is a company that has shown industry leadership over the past year in many ways, from its pioneering steps towards decarbonisation and the introduction of advanced technology, to its inauguration of a state-of-the-art operations centre and its industry-leading safety record, which comes despite operating in some of the worlds’ harshest conditions.

On behalf of the company, the award was collected by Evgeniy Ambrosov, Senior Executive Vice President of Sovcomflot. He said:

“It is a great honour for us to receive this award, and we consider this a tribute to the enormous contribution from everyone working at Sovcomflot at sea and ashore. This also demonstrates the support of our business partners and valued customers across the globe. It is fitting that on the cusp of IMO’s Sulphur Cap 2020 coming into force, the honour of being named ‘Company of the Year’ was awarded to Sovcomflot, the company that pioneered the adoption of cleaner-burning LNG fuel for large-capacity tankers. All our inaugural order of six LNG-fuelled Aframax tankers are operating ahead of expectations, with actual emission reduction figures surpassing their design targets, which proves the choice made by the company was right”.