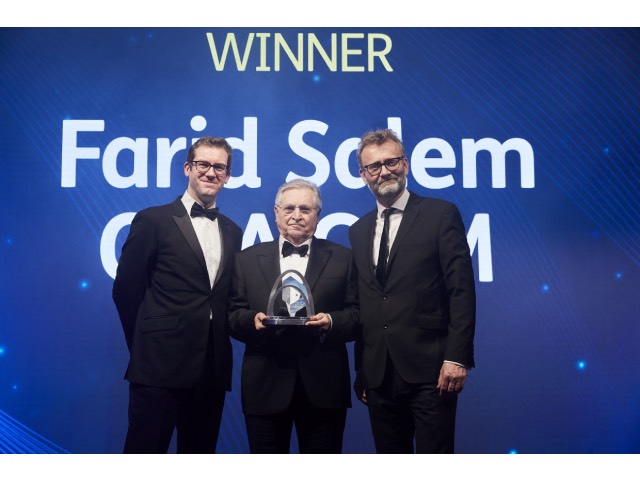 The CMA CGM Group, a world leader in shipping and logistics, is pleased to announce that Farid Salem was honored with the Lloyd’s List Lifetime Achievement Award in recognition of his exceptional contribution to the maritime sector. He received this prestigious award at the Lloyd’s List Europe Awards, which were held yesterday in London by the maritime industry’s leading publication.

Farid Salem, Jacques Saadé’s unfailing companion since the beginning of CMA CGM’s entrepreneurial adventure, participated in the creation and launch of the Compagnie Maritime d’Affrètement (CMA) in Marseille in 1978. Through his 41 years as Executive Officer, he contributed to making the CMA CGM Group a global leader in container shipping.

Farid Salem thus took part in all the Group’s major milestones, such as the 1986 expansion of the North Europe-Red Sea line into Asia, the 1992 opening of the Group’s first office in China, and the 1996 merger with CGM, which created a new French shipping giant. He also took an active role in the major acquisitions secured by the Group over the years, including Australian National Line (ANL) in 1998, DELMAS in 2005 and APL in 2016.

Additionally, Farid Salem was behind the development of the Group’s port activities with the creation of Terminal Link in 2001, which enabled CMA CGM to become one of the Top 10 global operators in less than 20 years via Terminal Link and CMA Terminals.

A man of passion with strong human values

A strong reference in the shipping world, Farid Salem is known for his humility, discretion and strong efficiency. Throughout his career, he demonstrated his adaptability and responsiveness on numerous occasions and his expertise, energy and loyalty were invaluable to the Group’s development.

Farid Salem was always keen to pass on his expertise. His involvement, determination and responsiveness shaped a working method within CMA CGM, and he trained many executives who continue their activities today within the Group, sharing with them a strategic vision and strong values.