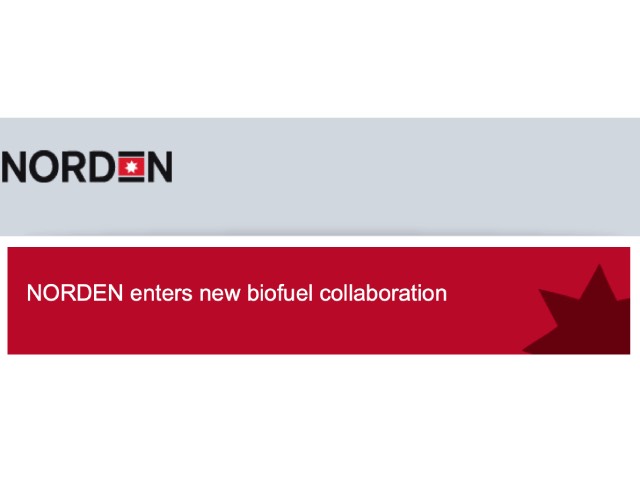 NORDEN has entered into a partnership with Danish based Kvasir Technologies, a spinout from the Technical University of Denmark with a patented technology to produce fuel from plant material.

“At NORDEN, we want to drive the shipping industry towards a cleaner future. If we are to truly make a difference, testing fuel alternatives is the right starting point”, says Henrik Røjel, Fuel Efficiency and Decarbonisation Manager at NORDEN. “The collaboration with Kvasir is highly welcomed, both as part of our aim to be a front runner in the decarbonisation agenda and because companies thinking outside the box is a necessity in the process of finding the solutions of tomorrow”.

Kvasir Technologies focuses on transforming the part of biomass known as lignin and using it in fuel production. Lignin is often seen as a waste product, discarded without being used, yet easily accessible and found in large quantities, allowing for a high degree of scalability compared to other feedstocks.

There are a number of ways to convert biomass to liquid fuels. Kvasir’s technology stands out as it is, unlike most other technologies, able to convert not only cellulose but also lignin into a liquid biofuel product.

“This project will demonstrate the suitability of our biofuel as bunkers and further accelerate the technological development,” says Joachim Bachmann Nielsen, CEO at Kvasir Technologies.

NORDEN’s interest in a partnership of this nature comes as a result of the company’s ever-growing wish to make shipping more sustainable. Finding better and greener alternatives to fossil fuel is thus highly prioritised within the company, which is already experienced in the testing of biofuel. In September 2018, NORDEN became the first ever to conduct a test voyage on a large ocean-going vessel powered by CO2 neutral biofuel.

“NORDEN wants to be a front runner in this phase of experimentation and help gather intelligence that will hopefully make a positive impact on greenhouse gas emissions and help the industry reach the ambitious goal for 2050 set by the International Maritime Organisation,” adds Henrik Røjel. “In the effort to be a front runner, NORDEN is assisting in the testing and development of biofuel on owned vessels while working on making biofuel a standard on the company’s long-term chartered vessels.”

A full-scale test of Kvasir’s fuel will be conducted on one of NORDEN’s vessels at a later stage during the 3.5-year collaboration, where the purpose is to achieve better knowledge of the characteristics of biofuel and prove its suitability for future use. NORDEN will continuously share its vast insights into the handling of vessels and what properties the fuel must have in order to be a viable and functioning option.

The biofuel collaboration between NORDEN and Kvasir Technologies is part of ShippingLab – a joint industry initiative aimed at developing Danish competences in the fields of digitalization, autonomous shipping and environment-friendly technology. ShippingLab is supported by Innovation Fund Denmark, the Danish Maritime Fund, Orient’s Fund and Lauritzen Fonden.

“Denmark is rightfully perceived as a leading nation within shipping and development of green technologies, and the collaboration between NORDEN and Kvasir Technologies is an excellent example of this, which we are very happy to support”, says Magnus Gary, Project Director at ShippingLab.