The Philippines for decades has supplied the largest share of labor on the world’s cargo ships. Filipino culture is brought aboard, from food to song and sports.

ABOARD THE UBC CYPRUS IN THE NORTH PACIFIC — On his first ocean voyage seven years ago, Jun Russel Reunir was sent deep into the bowels of a cargo ship, where he shoveled iron ore until his muscles ached — then continued shoveling for a dozen hours more.

“I cried in my cabin three times that month,” Mr. Reunir said.

Filipinos like Mr. Reunir, now 27, have for decades powered the global shipping industry, helping to move 90 percent of global trade.

A few months ago, he and 18 other Filipino men crewed a cement carrier traveling from Japan to the Philippines.

For a visitor along for the ride, the ocean voyage meant fresh sensations. The sound of the waves drowned out by the roar of the engines. The deck scattered with dead flying fish after a storm. The breeze filled with the smell of cheap bunker fuel.

But for the seamen, perhaps the only thing worse than the repetitive drudgery of their harsh labor was the boredom that came when they were done, any romance with the sea long since faded. 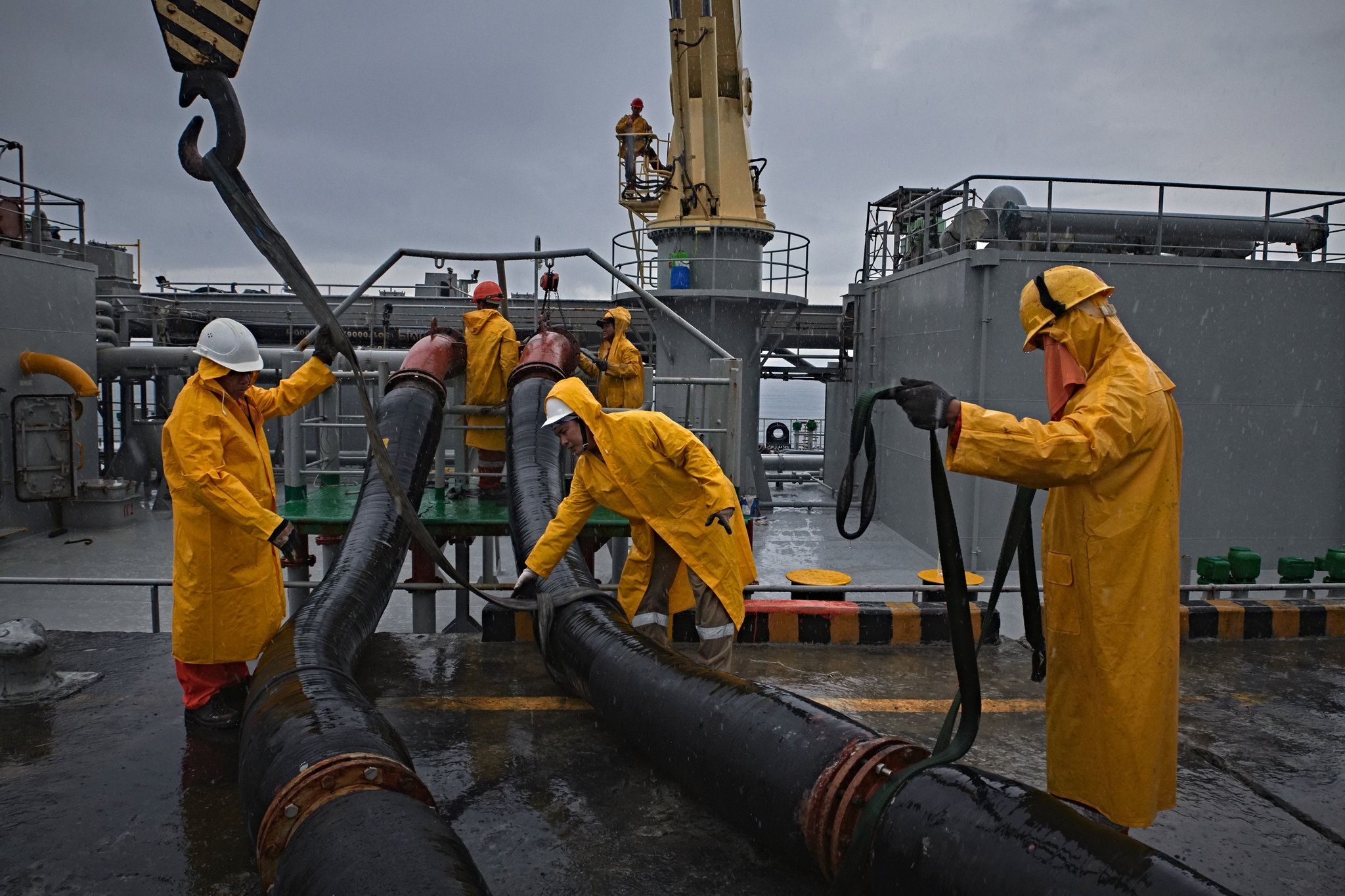 The crew of the UBC Cyprus unloading cement at the port of Calaca in the Philippines. 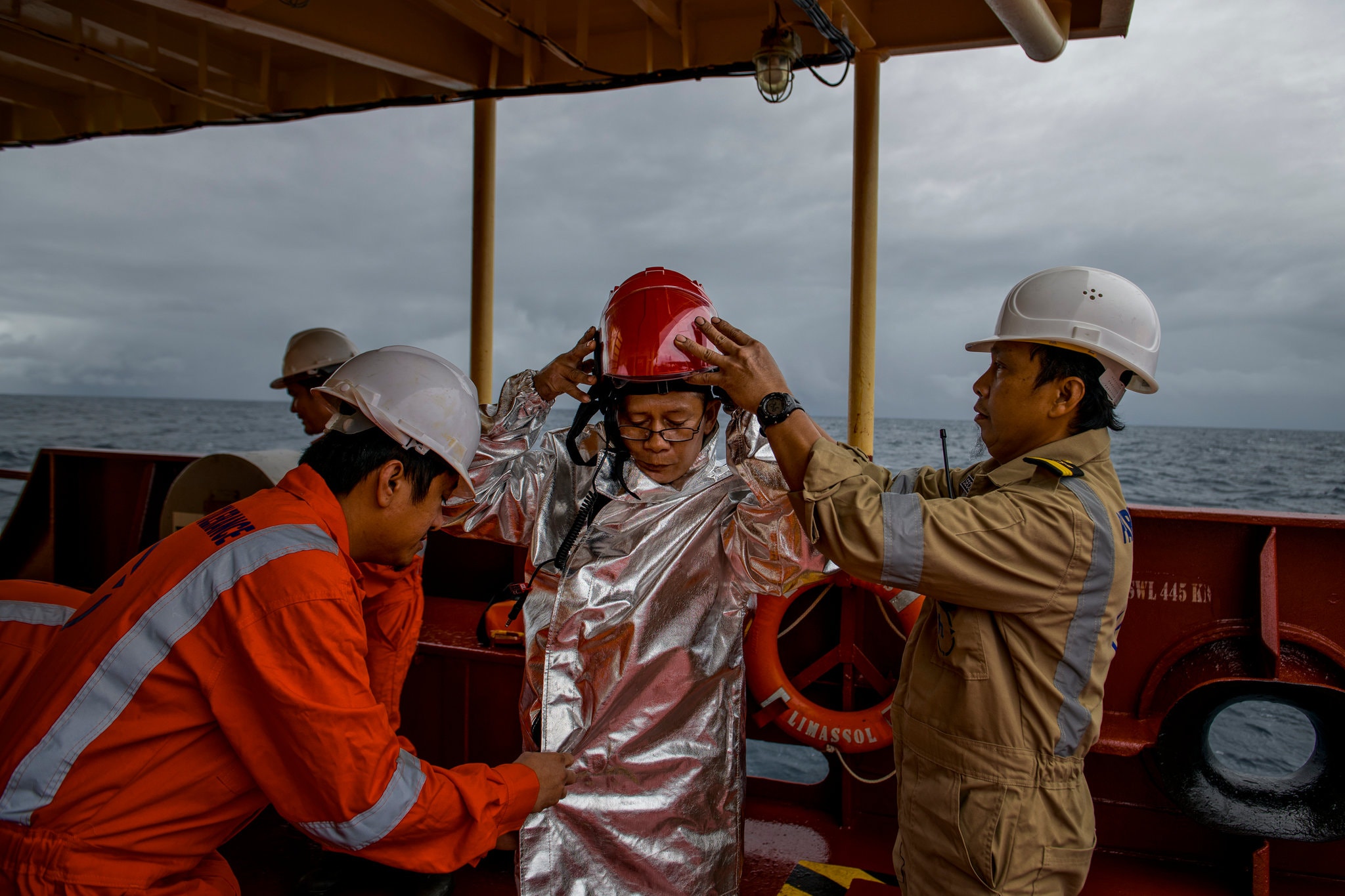 Arnulfo Abad, center, the engine-room fitter, being helped into fireproof clothing during a safety drill.

Jayson Guanio, 29, the ship’s cook, recalled that once, on a two-month voyage carrying bauxite from Montenegro to China, he ran up to the bridge to peer through binoculars at the flat rise of a distant island, just for the chance to look at something other than the sea.

Still, Arnulfo Abad, 51, the engine-room fitter, who has spent most of the last three decades on cargo ships, said he was grateful for the work. “The sea gave me my life,” he said.

The men on the ship are the sons of fishermen, carpenters and rice farmers. To be an officer — which most men aspire to — requires a college degree. Some who graduated paid for those degrees on the earnings from backyard piggeries, or made their pocket money selling Popsicles on the street.

They left behind lives in provincial villages where they could expect to make $100 a month. They earn 10 times that amount, often more, at sea. 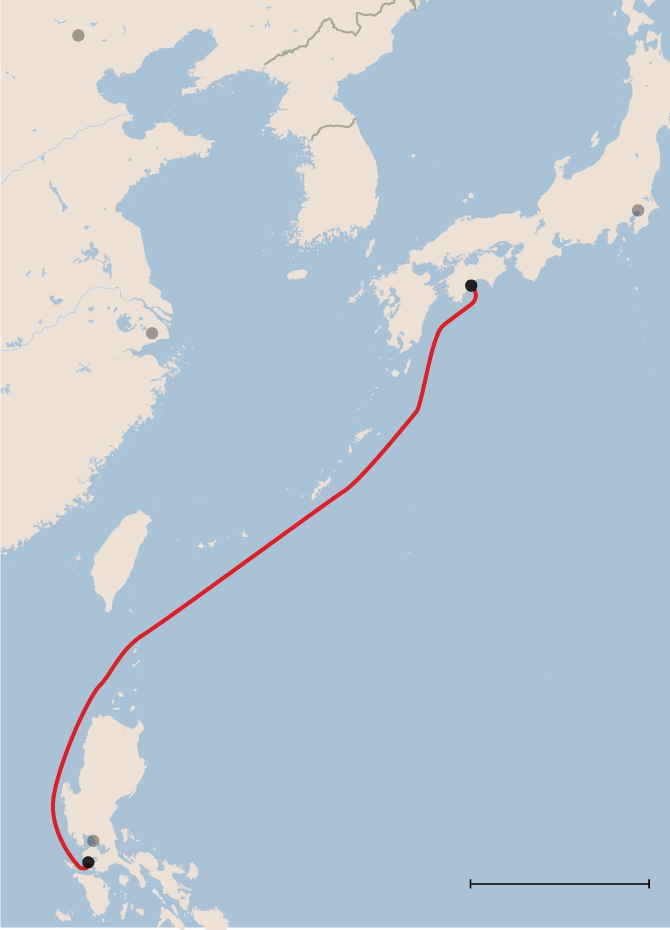 By The New York Times

They came home with thick, gold chains around their necks, built tall cement houses among their neighbors’ bamboo huts, provided for their parents and sent siblings, nieces and nephews to college. Marriage proposals poured in.

The country’s dominance of the arduous but well-paid work on cargo ships began in the 1980s, when an organized campaign began to train Filipinos for careers at sea. Employment agencies marketed Filipino seafarers to international shipping companies. Government agencies stepped in to manage their deployment.

An industry of marine colleges emerged to serve the class of strivers seeking the jobs. 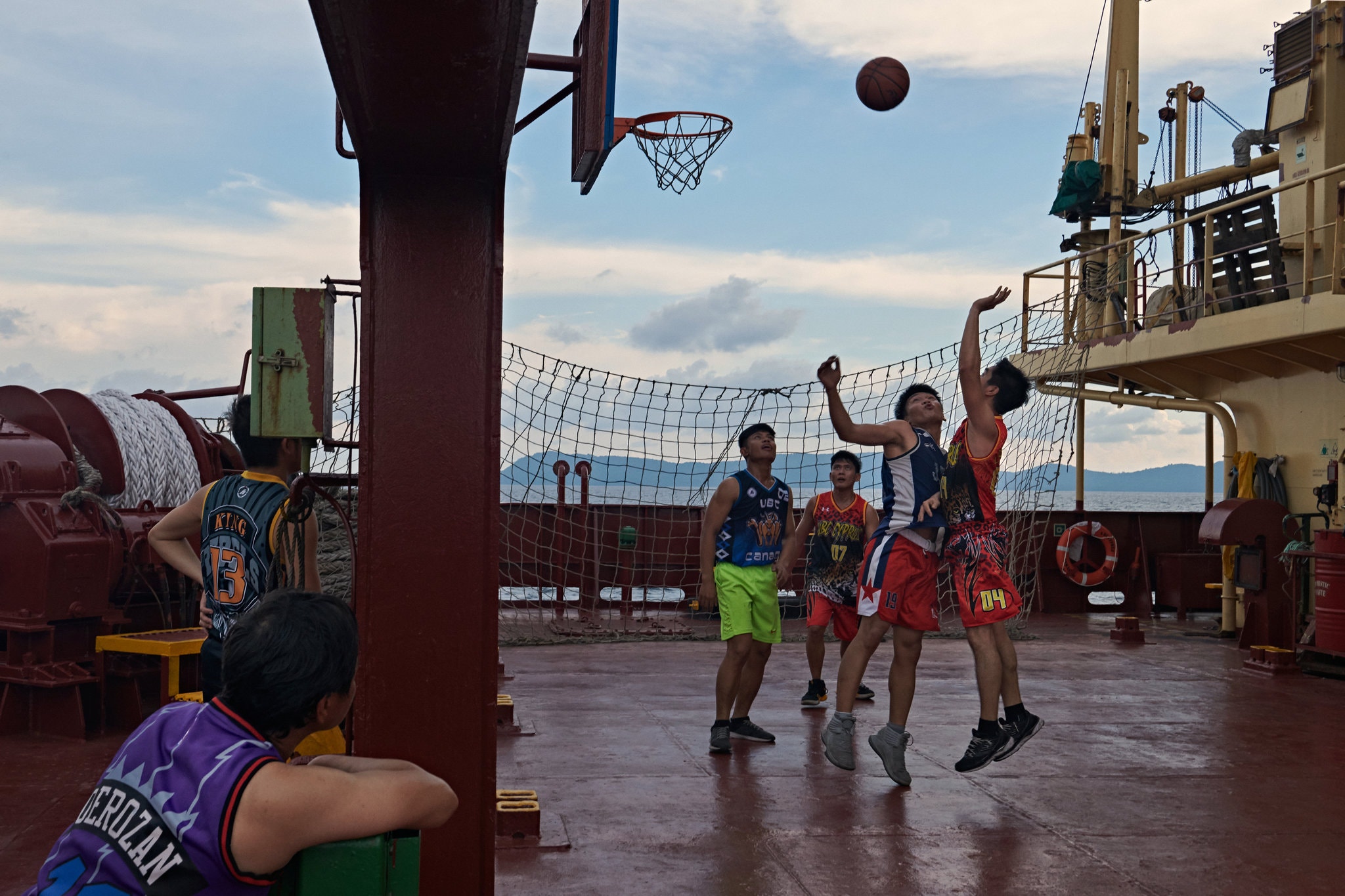 Playing basketball, the unofficial national sport of the Philippines, on the ship’s stern. 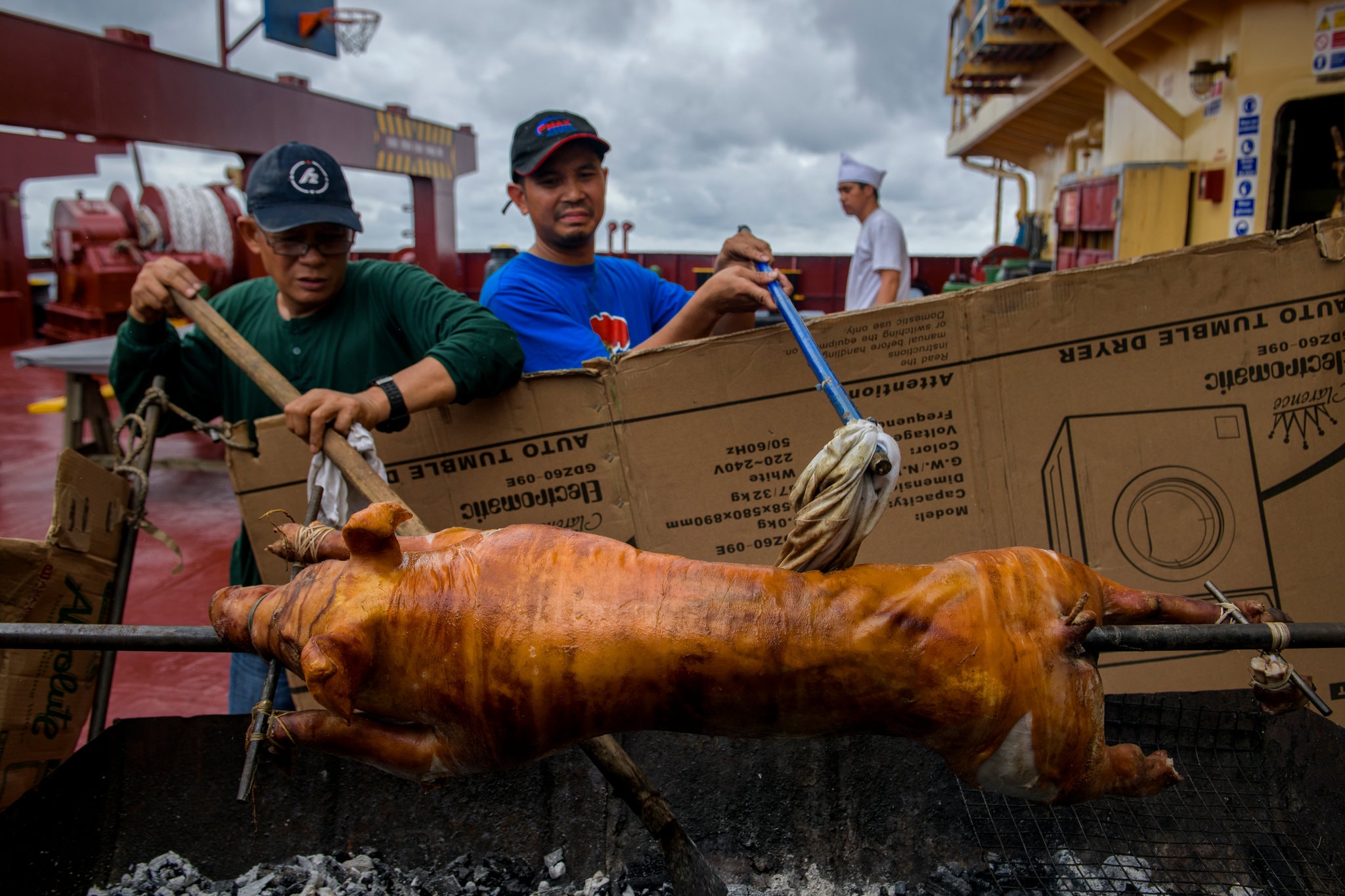 Roasting a pig for a taste of home. 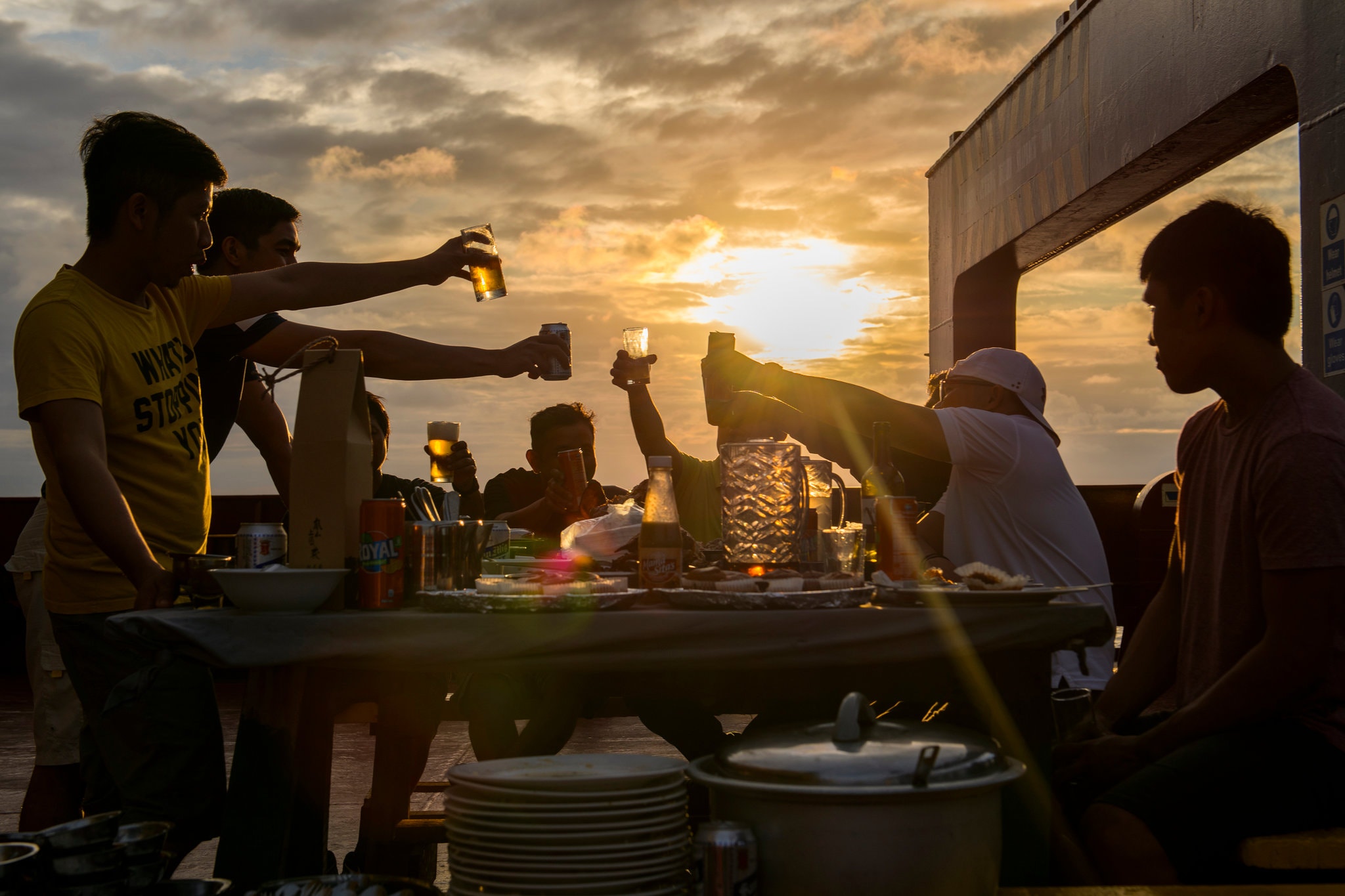 A crew toast aboard the ship.

In recent years, ships have been hiring more seamen from Vietnam, Myanmar and China. But about 400,000 of the world’s 1.6 million seafarers are Filipino. In 2018, these workers sent $6 billion back to their country in remittances.

In the Philippines, songs are written about their heroic sacrifices, legendary exploits and Lothario lifestyles.

In a karaoke staple, a lover laments that “I endured everything because you’re a seaman,” but in the end, discovers that “you’re a seaman-loloko,” a play on the Filipino word for a womanizer.

Aboard the UBC Cyprus, Filipino culture dominates, as it does on many ships.

Rodrigo Soyoso, the Filipino captain, started as an apprentice on a commercial fishing boat where three dozen men were allowed to bathe once a week, and he slept on deck, tied to a vent by the ankle to keep from sliding into the sea.

He crewed rusting tugboats, a putrid livestock carrier and cruise ships, working his way up to officer rank.

As captain, Mr. Soyoso ensures compliance with international maritime regulations, avoids collisions with other ships, and monitors cold fronts and monsoon winds. He tries to fend off corrupt customs officers, and stocks cartons of cigarettes for the ones he can’t.

Both the ship’s food and free time remind the sailors of home. 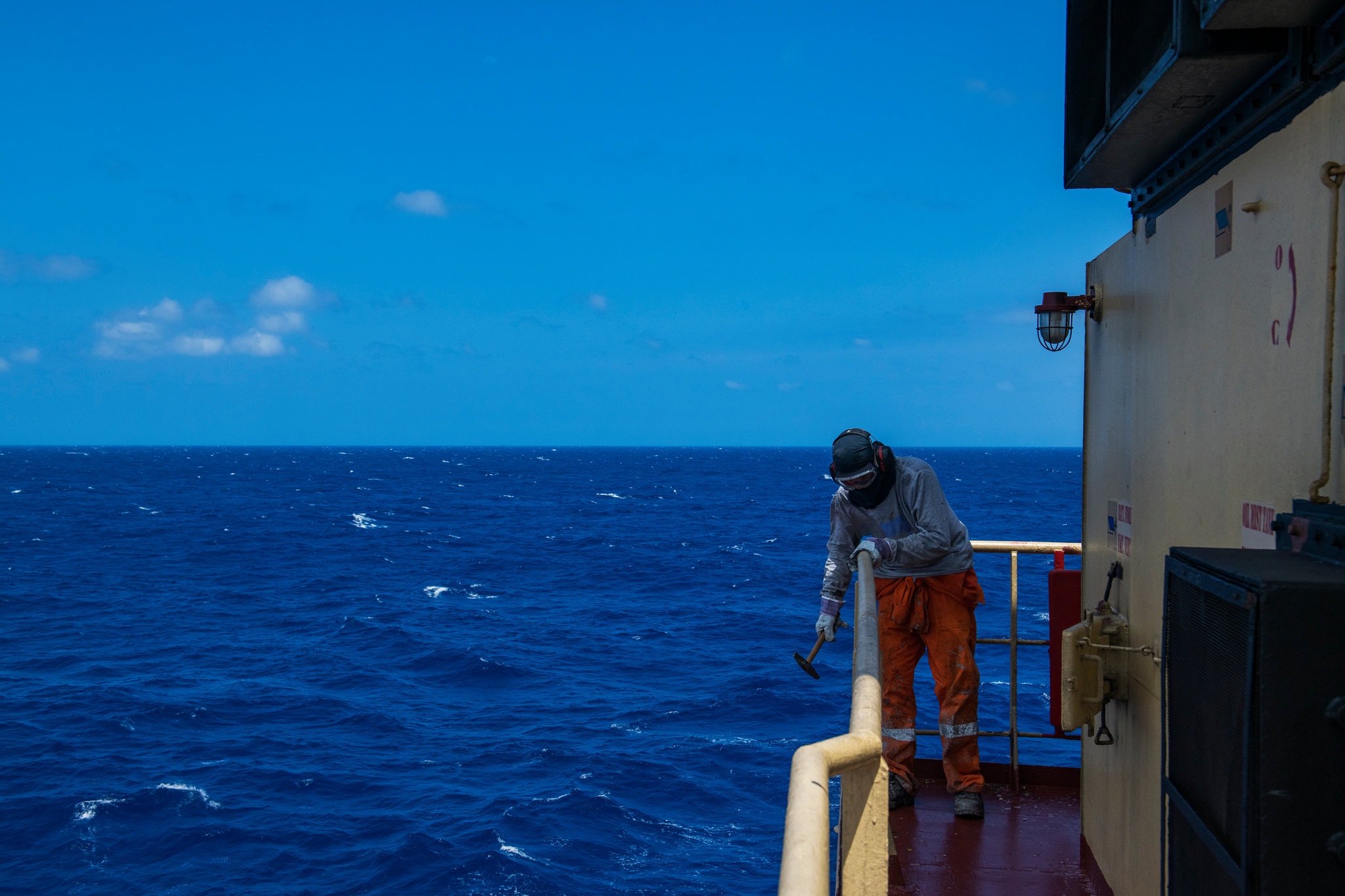 Making repairs on the ship’s stern. 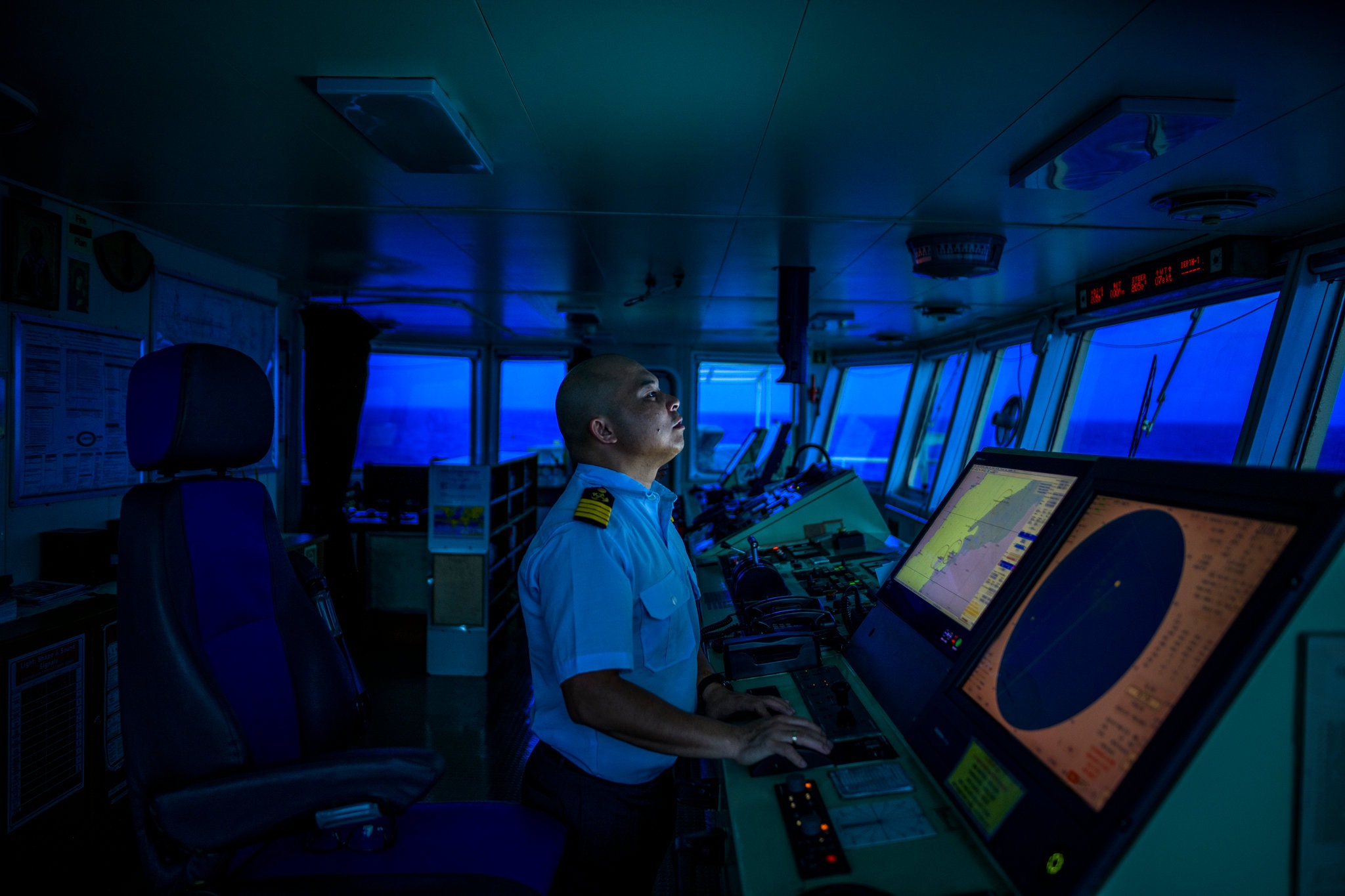 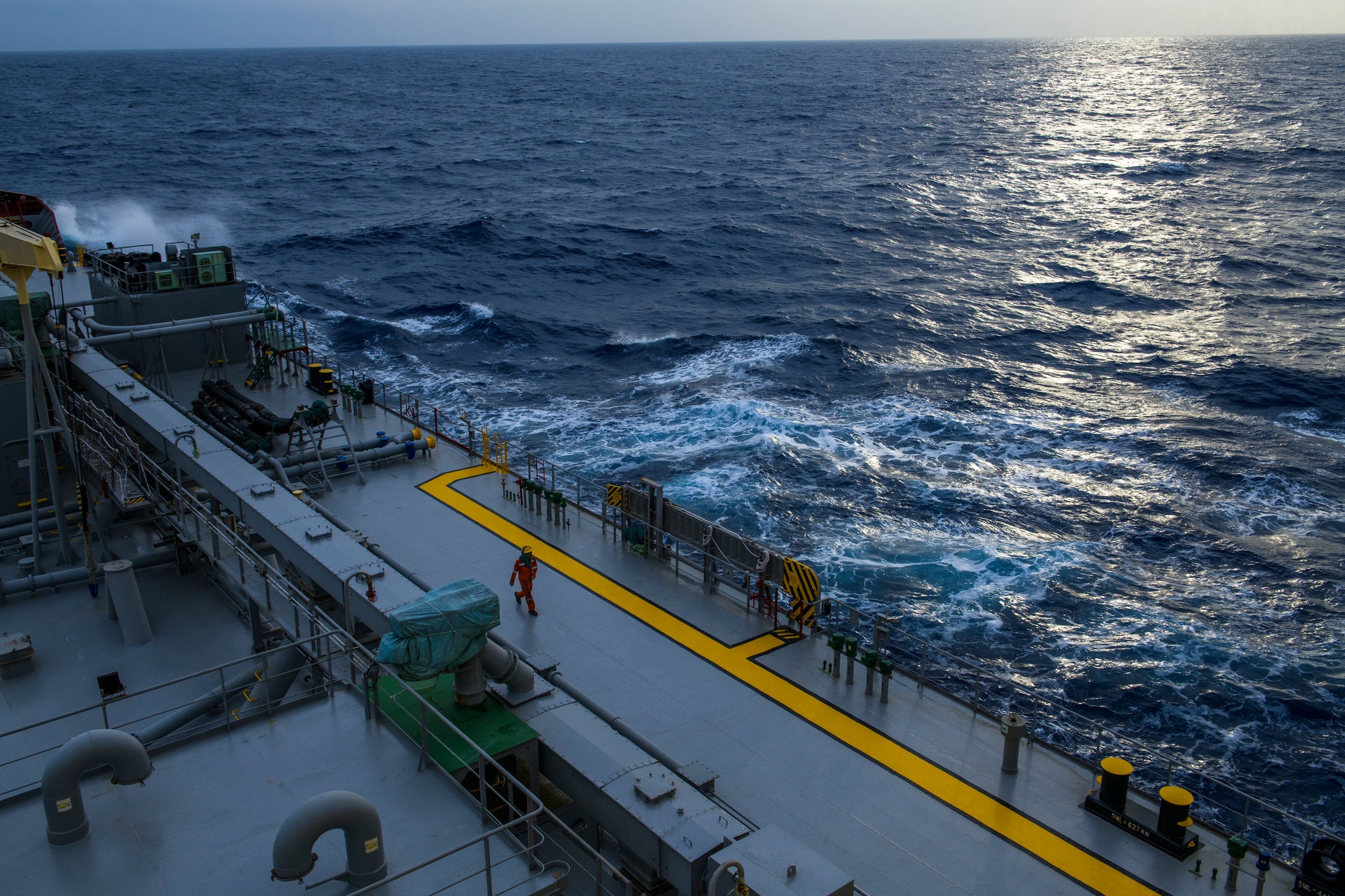 The ship nears Taiwan on its voyage from Japan to the Philippines.

One night, the men roasted a whole pig on a spit and broke open fresh coconuts. On the aft deck, there was a basketball hoop. Basketball is the unofficial national sport of the Philippines.

Another Filipino tradition carried on by seafarers are bolitas, metal bearings or bits of melted plastic shaped into balls, then implanted under the skin of the penis. Bolitas are meant to increase sexual pleasure for women, and the practice of implanting them is widespread enough among seafarers that they are required to declare how many bolitas they have at predeployment medical exams.

“They show them off,” said Mr. Guanio, the cook.

Aboard this ship, the crew was entirely male. About 1 percent of the world’s commercial seafarers are women.

During Saturday night karaoke in the mess hall, the men sang songs of longing with lines like “How long will my heart wait, longing for you?”

The internet has made ship life a little less lonely, but the men are given a free allotment of only 50MB to download on the ship. “Open Facebook and it disappears,” Mr. Soyoso said.

The internet is down on this voyage.

The men set their alarms for when they passed an island. They gathered between coils of mooring rope and a life raft at the port-side rails to try to siphon enough signal to receive text messages.

Before the internet, when seamen arrived at port, they elbowed each other to get to the phone booth first, trying to find out if a child had been baptized while shipmates banged on the plexiglass. 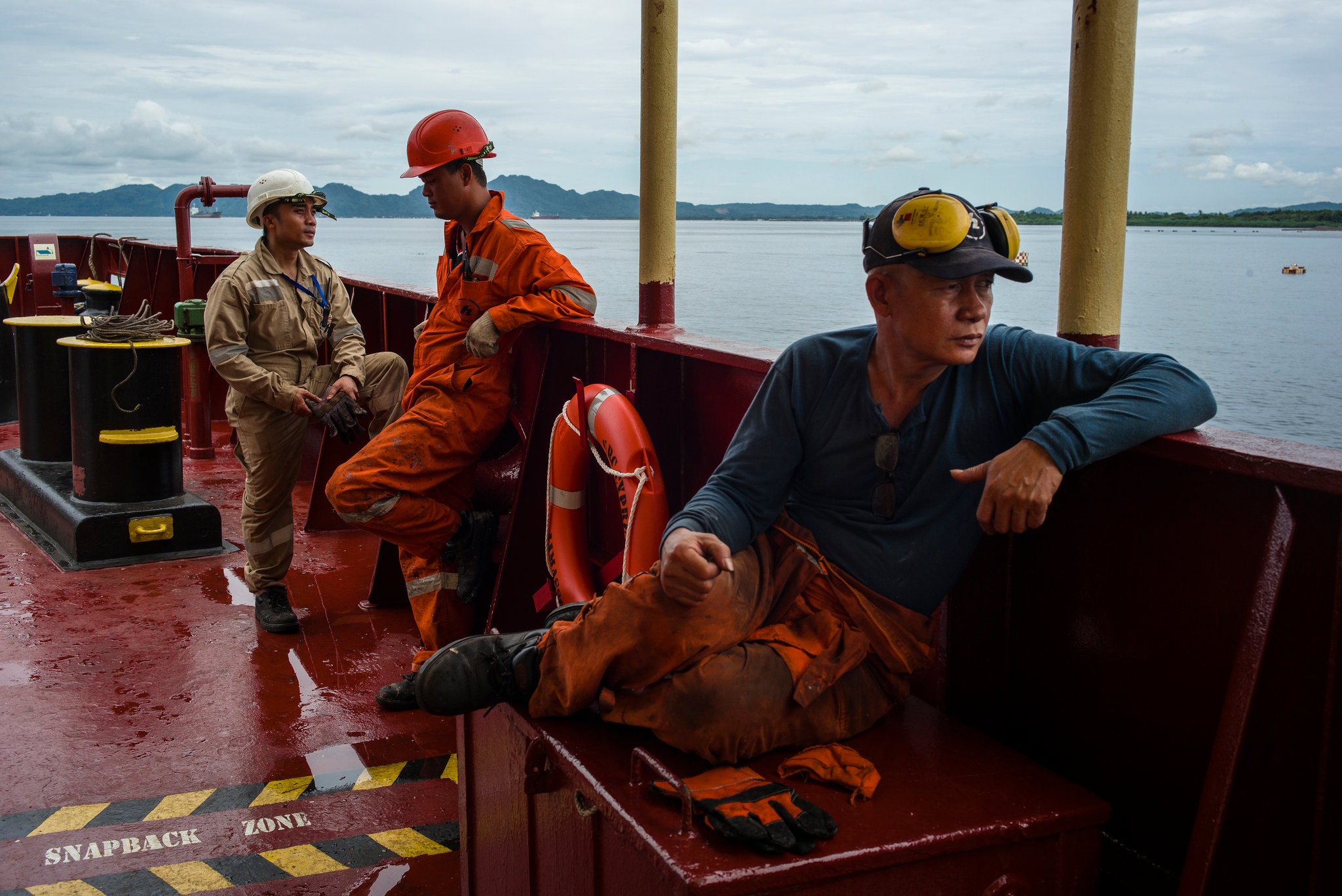 Taking a break before unloading the ship’s cargo. 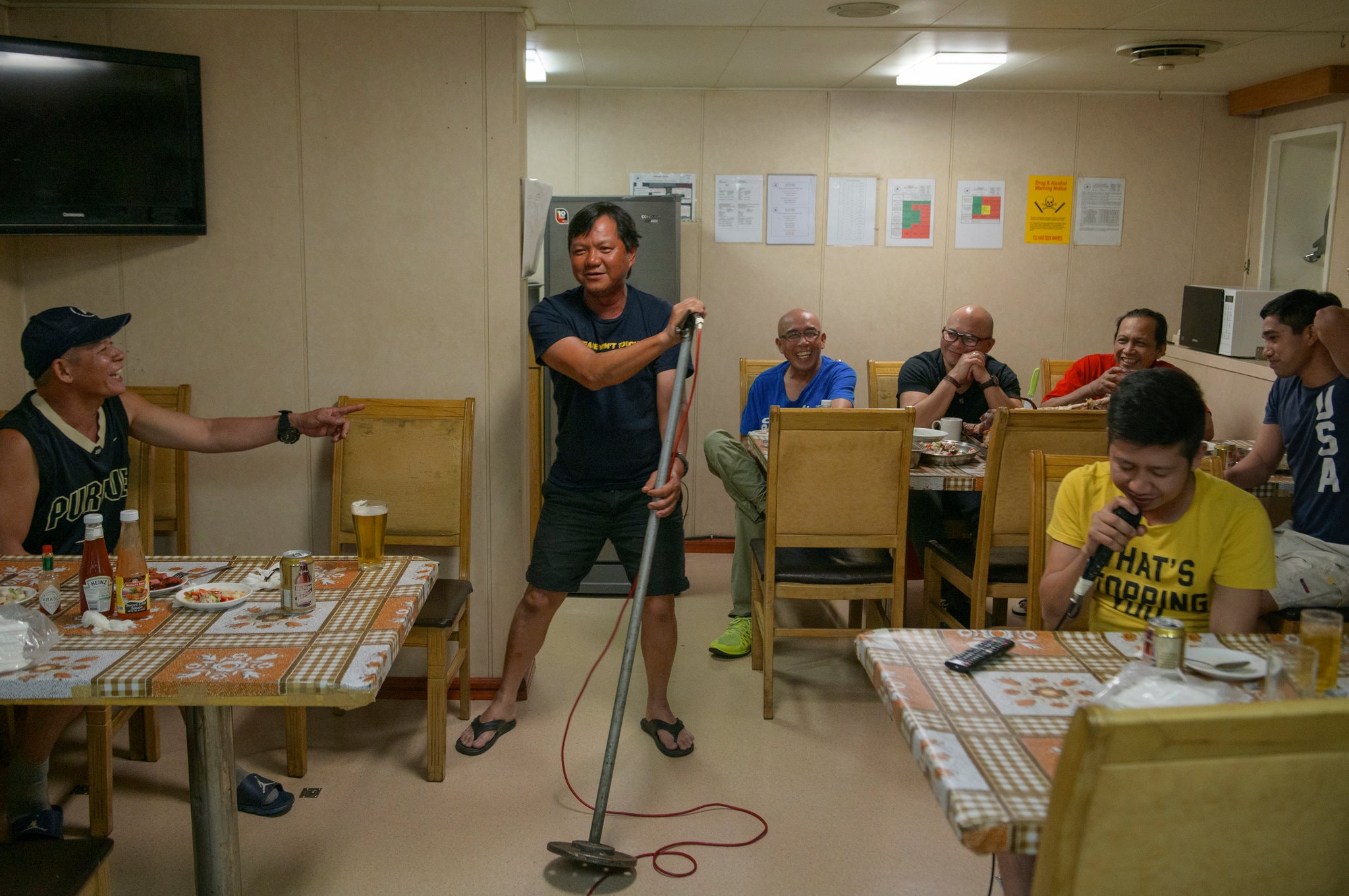 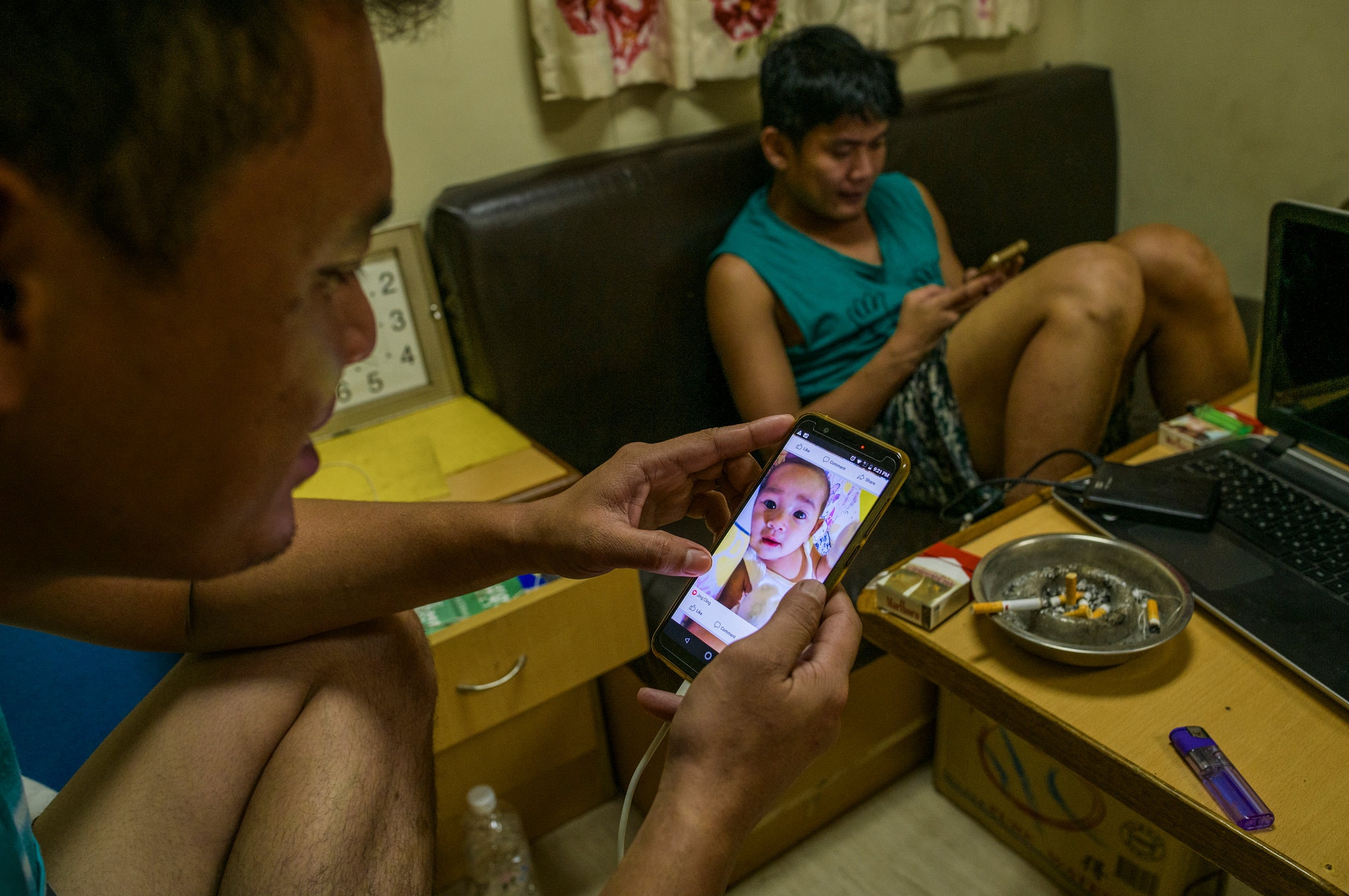 Jun Russel Reunir’s wife sends him photos of his baby daughter so she’ll know who he is, when they finally meet.

Back then, they also had a custom known as “over-over.” Seamen called their wives and girlfriends over a radio channel, saying, “I love you, over.”

The ocean is a dangerous place to work. In the last 10 years, 1,036 ships have been lost at sea, including another cement carrier that capsized in bad weather near Scotland with no survivors.

A mooring rope could snap with enough force to rip off a man’s head, or a falling grate could shear off fingers. A large swell breaking over the side could slam a man against pipes or wash him into the sea.

There are electrocutions, burns and appendicitis. The nearest hospital could be hours, or days away, by rescue helicopter.

The biggest challenge for seafarers, though, is enduring the mental strain of isolation, said Mr. Soyoso, the captain.

On a ship, with time to turn over your problems and no way to do anything about them, it’s easy to become despondent. Mr. Soyoso said he had seen men become too depressed to work, and others die by suicide.

The months away from family exact a heavy toll.

In April, Mr. Reunir was at port when his pregnant wife called. She was in labor. It was a girl.

“On her first birthday, I probably won’t be there either,” he said.

Mr. Reunir said he had wanted to be a seaman since childhood. Since achieving his dream, he has relished the adventure of sailing pirated waters in the Gulf of Aden, accepted the risks of North Sea storms, and endured 10-month long stretches of separation from everyone he loved.

But since he left for the sea, the Philippine economy has grown, and there are more opportunities on land.

After seven years onboard cargo ships, he’s now dreaming of buying some farmland and raising goats and pigs in the town where he grew up.

In the meantime, he asks his wife to show his baby daughter photos of him, so she’ll know who he is, when they finally meet.