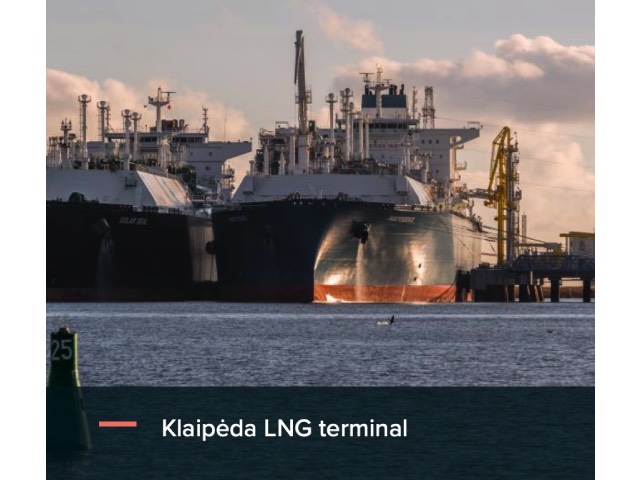 KN invited global and regional LNG companies that have LNG trading portfolios and / or LNG transport capacities and are interested in the development of the LNG market in the Baltic region and Poland to participate in the capacity allocation reservation tender. The final decision has been made based on the tender with the best price. According to Darius Šilenskis, KN CEO, the signed agreement allows KN to secure a steady revenue stream.

“KN will continue focusing on the flawless operations of LNG and oil terminals as well as development on the range of services provided for our customers. This is the main reason why for the purposes of developing the regional market, we decided to look for strong partners who would be interested in developing commercial activities with our infrastructure and would be actively engaged in the development of the LNG market. We are delighted with the partnership with PGNiG and believe that our synergies will contribute to strengthening the regional prospects,” says Darius Šilenskis, CEO of KN.

According to D. Šilenskis, the development of LNG as a significantly more environmentally sustainable energy source is also important in our region, given the intensified energy diversification in the. world in recent years and the need to search for less polluting energy and fuels in the context of global warming.

KN reloading station, located near the gate of Klaipėda port, officially opened in October 2017. It consists of five tanks for liquefied natural gas, each with a capacity of 1,000 cubic metres. Up to two LNG tankers and a small volume LNG vessel can be filled at the same time at the LNG reloading station. Upon the commissioning of the KN LNG reloading station, together with the opportunities provided by the LNG terminal in Klaipėda, KN became one of the first companies in the world, providing all integrated LNG logistics services, thus consolidating the full value chain in the region.

“This agreement broadens the horizons of strategic cooperation between Lithuania and Poland in the energy sector. We have an example of very practical and valuable cooperation rather than  theoretical. This is good news for the region and for natural gas consumers, as it means further development of the LNG market, increased access to LNG for off-grid customers, and more competitive prices” says Minister of Energy Žygimantas Vaičiūnas.

“KN appreciated our experience in operations and sales of small-scale LNG from the President Lech Kaczyński Terminal in Świnoujście and from our LNG facilities in Odolanów and Grodzisk Wielkopolski. PGNiG will also gain better access to the small-scale LNG market in the Baltic countries and increase the competitiveness of its offer for customers from the area of ​​north-eastern Poland and Central and Eastern Europe due to the use of the onshore LNG reloading station in Lithuania. It is very important from the point of view of security of supply that PGNiG will independently decide from whom to buy and bring LNG to the onshore reloading station in Lithuania,” commented Piotr Woźniak, President of PGNiG Management Board.

Polish Oil and Gas Company PGNiG deals with exploration and production of natural gas and crude oil and – through its branches and key companies from the Capital Group – with import, storage, sales, distribution of gaseous and liquid fuels, production of heat and electricity as well as geophysical and drilling services. Its subsidiaries and branches carry out exploration and production activities in Norway and Pakistan, gas sales in Germany and LNG trading through an office in London.