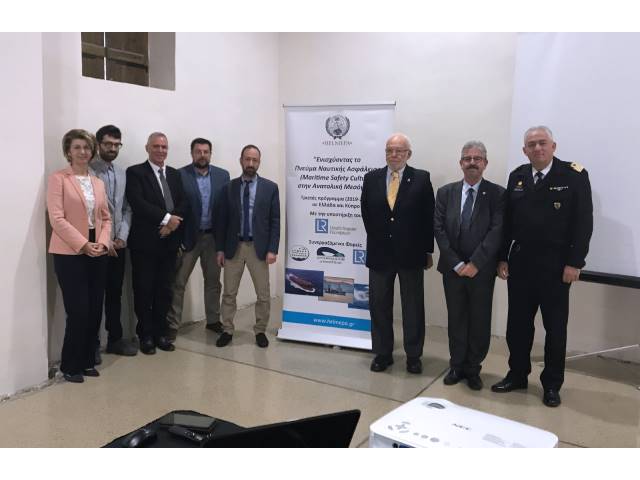 Following Salamina, Limassol was the next site to host the “Safety-At-Sea Workshop”, on Monday 25 November. The fruitful event took place at the Trakasol Cultural Centre in Limassol Marina and was organized by the Cyprus Marine Environment Protection Association – CYMEPA under the auspices of the Shipping Deputy Minister to the President of the Republic of Cyprus, Natasa Pilides.

The Workshop marked the launching in Cyprus of the activities of the 3-year Project titled “Enhancing the Understanding of New and Enduring Challenges in Maritime Safety Culture in the Eastern Mediterranean”, which is supported by Lloyd’s Register Foundation* and implemented by the Hellenic Marine Environment Protection Association – HELMEPA between 2019 and 2022, in cooperation with partners CYMEPA, Hellenic Lloyd’s and DYNAMARINe.

The following honored the event with their presence: the Cyprus Navy Commander, Commodore Charalambos Charalambous, the Head of the Port Police, Mr. Phillipos Konstantinidis and the Port Captain of Pafos, Mr Thomas Chrysostomou, representatives of the Deputy Ministries of Shipping and Tourism and the department of Fisheries, the Cyprus Union of Shipowners, the Cyprus Shipping Chamber as well as interested sea tourism professionals and pleasure craft owners.

Opening the event, the Secretary General of CYMEPA Dr Michael Ierides and the Director General of HELMEPA Mr Dimitris Mitsatsos referred to the exceptional cooperation of the two Associations and their mutual effort to achieve the project’s aims and to reduce maritime accidents in both countries.

Following a brief overview of the project’s activities and tools by HELMEPA’s staff member I. Pesmatzoglou, presentations by Messrs L. Makris (Inspector of Yachts & Small Crafts, Hellenic Lloyd’s) on the importance of behavioral-based safety in preventing accidents involving small boats and by Dr. N. Mazarakis (Physicist-Meteorologist, Marine Meteorology Professor) with practical knowledge on marine meteorology and advice on avoiding dangerous weather at sea drew the attention of the audience.

The Workshop’s program was completed by the Senior Marine Surveyor of the Deputy Ministry of Shipping, Mr K. Kofteros, who presented data on small boat accidents recorded during the past years by the competent agencies in Cyprus. The latter triggered a lively discussion on existing shortcomings regarding both the legislative framework and safety culture leading to such tragic incidents as well as on further steps to be taken by all stakeholders in order to prevent them in the near future.

The discussion came to a close with HELMEPA urging all participants to take action as “Safety Ambassadors” towards spreading the messages and results of the project among their colleagues and through their local or e-communities.

During the following biennium, at least another 8 such workshops will follow in coastal cities of Greece and Cyprus.