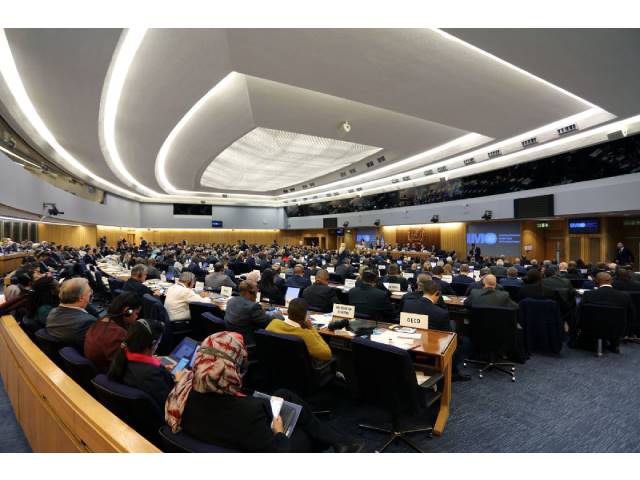 The Secretary-General of the International Maritime Organization (IMO), Mr. Kitack Lim, has opened the Organization’s 31st Assembly session, calling for concrete action to address climate change and other challenges.

“In so many areas, we are now at a crossroads. In the next biennium, IMO will need to deliver tangible and concrete action – to ensure our strategies, plans and roadmaps are achieved. I am confident that, together, we can succeed,” Mr. Lim said.

“While we always have to – and will – deliver on the mission of IMO to ensure maritime safety and security, environmental protection and the efficiency of shipping, we are also facing key challenges, such as the tangible threats from climate change, a universal effort to steer our world into a future of sustainable development, the increasing benefits and risks from digitalization and the need to preserve our oceans,” Secretary-General Lim told the packed plenary hall at IMO Headquarters in London. “The shipping industry is going through fundamental changes as it responds to these challenges.”

More than 1,700 delegates from IMO Member States, international governmental and non-governmental organizations have registered to attend the 31st session of the IMO Assembly (25 November to 4 December).

Mr. Lim highlighted the efforts made by IMO Member States and all stakeholders to pave the way for a harmonized and smooth entry into force of the global sulphur limit, referred to as “IMO 2020“. This will cut sulphur oxide emissions from ships substantially. “I am sure that, in 2020, all of you will continue to support our efforts and cooperation to ensure the smooth implementation of this important, global regulatory standard,” he said.

Moving onto climate change, Mr. Lim said Member States could be proud of the adoption, in 2018, of the initial IMO strategy to reduce greenhouse gas emissions from shipping and progress made by shipping in reducing emissions.

“But we must now accelerate progress towards the implementation of the initial strategy, looking at new fuels from renewable and sustainable sources, new methods of propulsion, and new ways of maximizing the efficiency of existing propulsion methods. IMO continues to lead the way, not only in the regulatory work but also with the successful implementation of a portfolio of practical projects,” Mr. Lim said.

He went on to reiterate the Organization’s commitment to fishing vessel safety, to combating marine litter, to incorporating technologies which increase connectivity and efficiency of working practices in maritime transport and to addressing maritime security challenges, including cyber risks, piracy and armed robbery, in a constantly changing world.

Safety at sea remains a core activity along with the well-being of over 1.6 million seafarers working on board seagoing ships every day, to deliver goods to people around the world, he said.

“I believe that we all are passionate about the safety of shipping and seafarers as well as seafarer rights, including fair treatment of seafarers in the event of a maritime accident. We have to recognize the need to keep regulations and guidance up to date, as seafarers have to adapt to the increasing demands, many driven by technology, which have a significant impact on their day-to-day life. I am certain that together, in particular with the cooperation of the maritime industry, we will make further progress,” Mr. Lim said.

Mr. Lim noted that the Assembly will hear reports on the Organization’s work over the past two years and will be requested to approve the work programme and the necessary budget to deliver this programme for the next biennium, as well as to elect a new Council to administer IMO until the next Assembly.

A number of Assembly resolutions will be adopted, including one on “preserving the legacy of the World Maritime theme 2019 and achieving a barrier-free working environment for women in the maritime sector”. This will build on numerous efforts during 2019 to promote gender equality.  “With this resolution, you point the way for future efforts on gender equality,” Mr. Lim said.

“Shipping will be an enabling factor for good. We have before us an opportunity to revolutionize an industry that is indispensable to the world, its economy and its people. Let us continue to seize that opportunity,” Mr. Lim said.

The Right Honourable Nusrat Ghani, Maritime Minister of the United Kingdom Government, also welcomed delegates to the Assembly, as the representative of the Host State.

The outgoing President of the Assembly, His Excellency Mr. Rolando Drago Rodríguez, former Ambassador Extraordinary and Plenipotentiary and Permanent Representative of Chile to IMO, and the incoming President, Her Excellency Ms. Nomatemba Tambo, High Commissioner of South Africa to the United Kingdom, also addressed the Assembly.

A number of other Ministers and high-level Member State representatives will address the Assembly.

The Assembly elected the following officers:

1st Vice-President: H.E. Ms. Enna Park, Ambassador Extraordinary and Plenipotentiary and Permanent Representative of the Republic of Korea to IMO.

The 31st Assembly of IMO is meeting in London at IMO Headquarters from 25 November to 4 December 2019. All 174 Member States and three Associate Members are entitled to attend the Assembly, which is IMO’s highest governing body. The intergovernmental organizations with which agreements of co-operation have been concluded and international non-governmental organizations in consultative status with IMO are also invited to attend.

The Assembly normally meets once every two years in regular session. It is responsible for approving the work programme, voting the budget and determining the financial arrangements of the Organization. It also elects the Organization’s 40-Member Council.