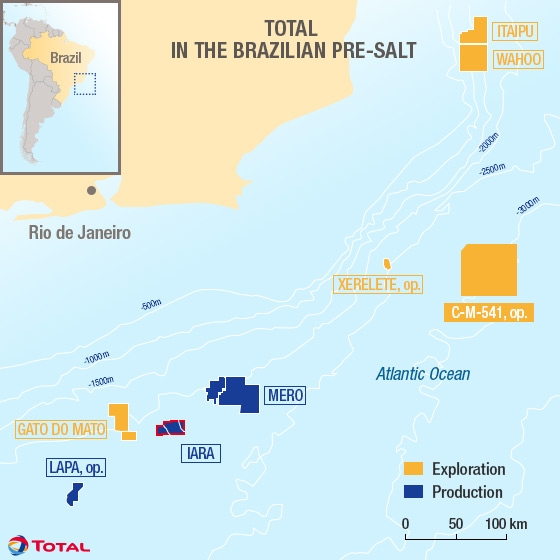 Total announce first oil from the Iara license (Block BM-S-11A), located in the deepwater Santos Basin pre-salt. This marks the start-up of the FPSO P-68, the first of the two floating production, storage and offloading units (FPSO) already launched and to be installed on the license. The second, the P-70, is expected to come on stream in 2020. Each unit has a capacity of 150,000 barrels of oil per day.

“First oil from Iara is a new milestone for Total in Brazil. It increases our share of production from the highly prolific pre-salt area, adding to current output from the Total-operated Lapa field, and the extended well tests under way on the Mero field,” said Arnaud Breuillac, President Exploration & Production at Total.

Total has been present in Brazil for over 40 years and has more than 3,000 employees in the country. The Group operates in all segments: exploration and production, gas, renewable energies, lubricants, chemicals, and distribution.Total Exploration & Production’s portfolio currently includes 23 blocks, with nine operated. In 2018, the Group’s production in the country averaged 19,000 barrels of oil per day. By 2025, Total’s production should exceed 100,000 barrels of oil per day. On June 2019, Total and its partners made the investment decision for the second phase of the Mero project. The Mero 2 FPSO will have a liquids treatment capacity of 180,000 barrels per day and is expected to start up by 2022. The Mero 1 project, currently under development, is progressing as per plan, with start-up scheduled in 2021. In October 2019, a consortium led by Total was awarded Block C-M-541, located in the Campos Basin, in the 16th Bidding Round held by Brazil’s National Petroleum Agency (ANP).

In 2017, Total and Petrobras formed a Strategic Alliance encompassing exploration and production and gas, renewables and power activities. Through the Alliance, the two groups are implementing R&D projects on topics such as artificial intelligence leading to efficiency gains, with direct applications in Brazil.Total entered the fuel distribution market in Brazil with the acquisition in December 2018 of Grupo Zema’s distribution activities. Total thus owns a network of 280 service stations, as well as several storage facilities for petroleum products and ethanol.