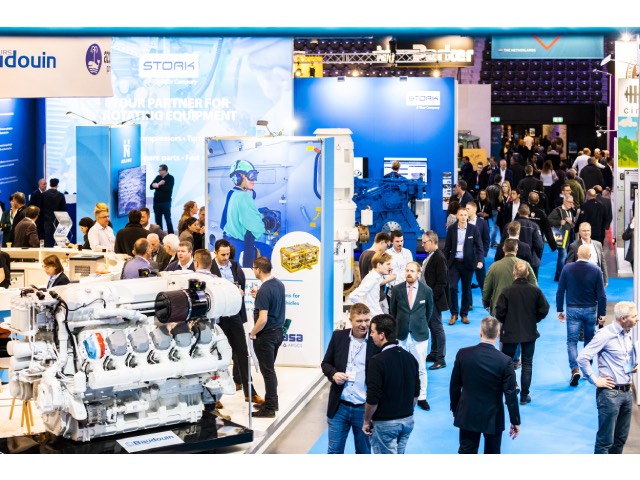 Special ship markets in recovery and real progress on maritime digitalisation brought a feelgood finale to Europort 2019, as the last of 26,076 visitors from 93 countries departed from the biennial conference and exhibition after an energetic week of events at Rotterdam Ahoy on Friday 8th November.

With over 1,000 exhibitors and a record number of international visitors, Europort’s focus on special ship markets paid particular dividends in 2019, as its successful recipe of conference sessions, Masterclasses, networking events and exihibitor showcases came seasoned with a sprinkle of market opportunity and business wins.

The upbeat mood extended across the exhibition floor, with one of the many international shipyards present even signing up for new business. At a formalised contract signing, A. Noyan Altuğ, CEO of Uzmar and DMT Sales Director Andre Schelling agreed that the Dutch winch maker would supply of two shipsets to equip a pair of ASD3200W tugboats under construction at the Turkish yard.

As Europe’s largest port, Rotterdam has few rivals when it comes to staking a claim as the Maritime Capital for Europe, and a visit to Europort by Cora van Nieuwenhuizen, Minister of Infrastructure and Water Management reinforced Dutch government ambitions that more ships calling will be flying the Dutch tricolor.

Formally opening the new ‘NL flag portal’, Van Nieuwenhuizen said: “In recent years, the number of ships operating under the Dutch flag has increased less rapidly. That is why it is now all hands on deck to turn the tide. We want to remain amongst the best in the world. I am proud to announce this at Europort, the global maritime exhibition.”

The Minister was also presented with the latest edition of the Dutch maritime cluster publication Maritime Monitor, whose publication Rob Verkerk, chairman of the Netherlands Maritime Sector Network Organisation (NML), said had given him reason for “a smile”.  “There is undeniably an upward trend in our industry. The art is to keep it up,” he said.

With Europort’s next edition, taking place 2-5 November 2021, set to benefit from the addition of a completely new convention center alongside the existing venue, growing overall space by 50%, the outlook from organisers Ahoy was especially positive after a packed 2019 programme.

“One of the most exciting developments was seeing #YoungEuroport taking on a life of its own: exploring the opportunities and challenges facing the next generation of maritime professionals resonates with the industry leaders of today and tomorrow,” said Raymond Siliakus, Europort Exhibition Manager. “We also saw terrific traction for the ‘CareerLab’ career guidance and exhibitor vacancy meeting point, for the first ‘Young NMT’ event and for the YoungShip Seminar.”

High points had also included a busier than ever MariMatch, Europort’s matchmaking event to connect maritime professionals and organsiations from all over the world, the Royal Institution of Naval Architects Maritime Industry 4.0 Conference, and the well-attended parallel CEDA Days and European Tugowners conference.

Siliakus said Europort 2019’s daily Masterclasses had also “truly delivered” on their mission to act as a melting pot for new ideas and thought leadership, on digitalisation, autonomous ships, renewables and advanced shipbuilding techniques, “sharing knowledge at the cutting edge of industry.”