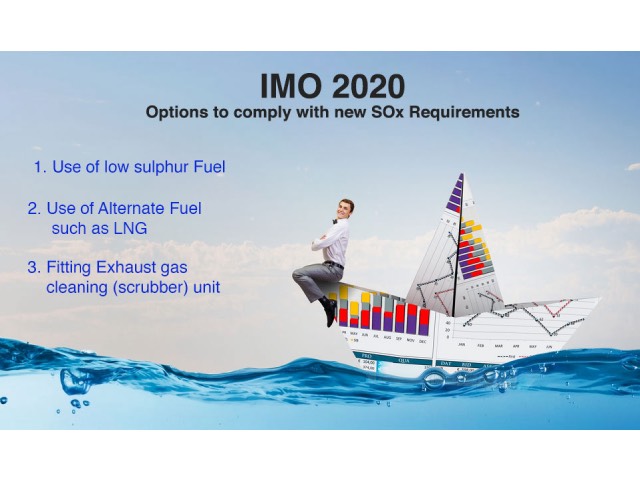 Singapore — The upcoming IMO 2020 sulphur emission regulation is prompting both owners and charterers to negotiate and incorporate new clauses in their charter party agreements, or CPAs, to factor in the performance of scrubbers and use of compliant bunkers.

At the same time, owners and charterers, who have non-scrubber ships on long-term charters, are exhausting their supply of high sulfur fuels by taking longer voyages.

Also, owners who are getting scrubbers installed are adopting a creative approach and are even seeking a share of the notional savings that will accrue from the use of high sulfur fuels on the time chartered tonnage, said a participant at a seminar organized by the Institute of Chartered Shipbrokers, or, ICS, late Wednesday in Singapore.

High sulfur fuel oil, or HSFO, enjoys a large discount to the low sulfur marine fuels. Installing scrubbers and using relatively cheaper HSFO will result in saving costs on bunkers, at least in early 2020. However, scrubbers involve a one-time investment running into hundreds of thousands of dollars and collating it with lower fuel costs is a tedious exercise.

As a result, both owners and charterers are trying to get clauses incorporated in the charter party agreements to address such issues and also potential claims related to the new regime, the participant said.

Many disputes between owners and charterers are expected to arise due to the new regulations on low sulfur marine fuels which will be related to both scrubbers and bunkers, said a maritime lawyer in Singapore.

Shipping industry is bracing up for several unforeseen scenarios such as engine damage due to inferior quality of fuels, off-spec bunkers being loaded in the ships and scrubbers ceasing to work on high seas, the lawyer said.

In all such scenarios, the pressing issue is of liability and unless the wordings in the CPAs are well-defined, there is a potential of disputes arising, he said.

As far as the scrubbers are concerned, they are part of the hull and machinery and therefore will be covered by the maritime insurance, a chartering source said.

“It is nobody’s case that scrubbers be treated separately from the rest of the ship and they also carry a warranty from the manufacturers,” the source said.

More importantly, it is the cost and investment structure woven around the installation of scrubbers that will determine the notional gains or losses to owners and charterers, he said.

At the time of decision making for scrubbers, owners seek to cover their expenses and the time charter or period charter rates are accordingly revised upwards, he added.

Even though the scrubbers are part of the hull and machinery, period charter CPAs which were concluded earlier and whose duration will span both current and also low sulfur regime for marine fuels from 2020 are being revised to include their categorical mention, said a maritime lawyer in Tokyo.

Liability of any accidental discharge of effluents from a scrubber at a prohibited place needs to be sorted out, sources said.

Maritime and Port Authority of Singapore has recently issued a technical advisory on best practices on installation and operation of scrubbers, its Chief Executive, Quah Ley Hoon said Friday at a conference on the country’s registry of ships.

There are instances where owners and charterers have turned innovative and agreed upon different formulae to cover the cost of installing scrubbers, the lawyer said.

In one such case, the owner invested in the scrubber and the charterer agreed to share with him the savings he makes, if and until HSFO enjoys a discount over the bunkers with low sulfur.

“This is a complicated arrangement and it will be better if the two parties agree on a fixed number for period charters,” a shipping consultant said.

Charterers need to watch out for liabilities they will be exposed to in the CPAs, the lost time due to unforeseen problems in scrubbers and engines and use of bunkers of questionable quality and any extra costs that may accrue to them, said an executive of a Western Protection and Indemnity, or P&I club.

At the ICS seminar, participants said they are seeking a certificate of quality from bunker suppliers before loading the fuel onboard.

Lawyers pointed out that under the new regime, any potential damage to engine of the ships due to use of inferior or off-specification bunkers will trigger a series of claims and counter-claims and it is in this context that the CPAs have to be carefully negotiated.

In a straight forward situation, the usual P&I rules apply but with new regulations being implemented, even the owners are worried that some of the machinery breakdown may not be under the insurance cover, the P&I club executive said.

Lost time due to such disputes can delay the delivery and sale of cargoes, during which the price of the cargo changes significantly.

Cargoes are at time sold to the receiver at a price prevailing when the ship gives the notice of readiness at the port of delivery, subject to a deadline.

Unforeseen scenarios relating to bunker quality, engine operations and scrubber functioning may result in lesser costs compared to the price change if the cargo itself is not delivered by the stipulated time, said one of the lawyers involved in arbitration of such disputes.

Owners, whose ships have not installed scrubbers are already trying to make the transition to the new regime smooth by using up their existing inventories of high sulfur fuels in double quick time.

“We are trying to use up all our fuel in one single long haul trans-Pacific or Atlantic longhaul voyage,” one owner said.

With each passing day, there will be more demand for low sulfur bunkers and the best way to cut the existing stocks of HSFO is to take long voyages some weeks before the final day, said a clean tankers’ broker in Tokyo.

“It is a headache for owners who also have to clean up their on shore tanks for low sulfur fuels,” the broker said.