On Sunday, 3 November, the maritime leaders of tomorrow from over 70 countries graduated from the World Maritime University (WMU). The graduates have received the education required to contribute to the implementation of the United Nations Sustainable Development Goals (UN SDGs) in their home countries as well as within the broader maritime and ocean community. They are equipped to become the maritime and ocean leaders of tomorrow that will promote safe, secure, environmentally sound, efficient and sustainable shipping on clean oceans. 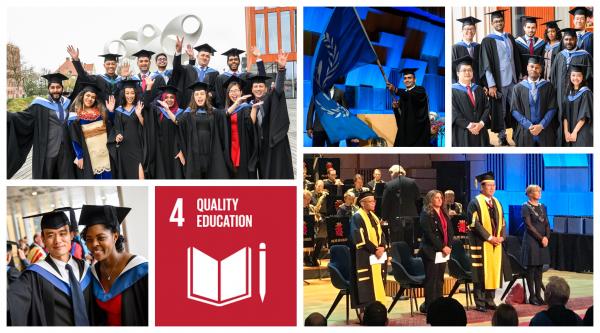 WMU President, Dr Cleopatra Doumbia-Henry, delivered welcome remarks. In addressing the graduates, President Doumbia-Henry encouraged them to take advantage of the WMU alumni network, joining or activating national alumni groups to foster the power of the global WMU network. Further, she emphasized the important role the graduates will play in achievement of the United Nations Sustainable Development Goals when returning to their home countries. “You are now experts in perhaps the most important areas for the future of mankind. You are all aware of the importance of the issues surrounding climate change, and of the pressing need for us all to become carbon-neutral in a rapidly decreasing time-frame…You are the citizens of this globalised world. Its future is in your hands,” she said.

Mr Kitack Lim, the first International Maritime Organization (IMO) Secretary-General and WMU Chancellor to hold a MSc degree from WMU, conferred the degrees on the graduates. In his remarks, he thanked the City of Malmö and the Government of Sweden for their continued generosity and support in hosting the University, as well as the many donors for their ongoing commitment to the WMU mission and its sustainability.

Mr Lim reflected on his own experience, having graduated with a WMU MSc degree in 1991, highlighting the profound impact it had on his life in terms of gaining lifelong friendships as well a global professional network. He noted the responsibility the graduates now have as they return to their home countries saying, “I urge every one of you to assume ownership and shoulder your part of the responsibility of moving the world forward in a sustainable manner and leaving no one behind. You are now in the enviable position of having the knowledge and the power to turn ideas into reality. This will improve our lives, benefit our countries, our regions, and our planet.”

The Guest of Honour was Ms Sadan Kaptanoglu, President of BIMCO. She encouraged the graduates to go beyond the knowledge they gained at WMU, and push their imaginations to solve the global challenges we are facing today. “We need smart, well-educated experts and leaders, to help us imagine and implement the changes needed to address these challenges and – in time – to lead the industry towards zero emission,” she said.

Representing WMU’s host city of Malmö, the Chairperson of the Malmö City Council and Mayor of Malmö, Ms Carina Nilsson, noted the honor of hosting WMU in Malmö as the University makes a unique contribution to the local community as well as globally, educating maritime and ocean leaders. She highlighted that the United Nations Sustainable Development Goals are a guiding light for the City of Malmö, as well as WMU and its alumni. “You now have the latest knowledge and the world as your field of work. You are the future leaders within the maritime field,” she said.

Mr Natig Hasanov, President of the Student Council, also addressed the gathering and to his classmates, in particular, he said, “Today might be the last day for some of us as students, but as of tomorrow we have new missions. We must fulfill the visions of the International Maritime Organization, the World Maritime University and international maritime community regarding enhancing maritime safety, security as well as developing sustainable shipping on cleaner oceans.”

Awards made during the ceremony included:
Dr Stephen Cross was awarded Honorary Professor in recognition of his service to WMU as a Professor, Adjunct Professor and Visiting Professor since 1988, and his service to the International Maritime Lecturers’ Association.

Mr Kent Andersson was awarded Honorary Fellow in recognition of his distinguished service to WMU as Deputy Mayor from 1998 to 2010 and then as Mayor of Malmö from 2010 until his retirement last year, as well as his long service as a member of the WMU Board of Governors, and his generous and sustained support of the growth and development of the University.

Mr Peter Hinchliffe, OBE, was awarded Honorary Fellow in recognition of his distinguished service to the maritime world within the International Chamber of Shipping and the International Shipping Federation from 2001 to 2018, as well as his service as a member of the WMU Board of Governors from 2012 to 2018 and his pivotal role in the development of a number of international conventions.

Ms Nancy Karigithu was awarded Honorary Fellow in recognition of her distinguished service to the maritime world, as Director-General of the Kenya Maritime Authority, as a Chairperson of IMO’s Technical Cooperation Committee, as a member of the WMU Board of Governors since 2010 and as a champion of the Association for Women in the Maritime Sector in Eastern and Western Africa.

Ms Claudia Grant was awarded Outstanding Aluma in recognition of her distinguished service as Deputy Director-General of the Maritime Authority of Jamaica, as Chairperson of the Sub-Committee on Implementation of IMO instruments (III), and as President of the Women in Maritime Association Caribbean. Ms. Grand received her Master of Science degree from WMU in 1991.

Dr Kofi Mbiah was awarded Outstanding Alumnus in recognition of his distinguished service as Chief Executive Officer of the Ghana Shippers’ Authority for two decades, as Chairman of the IMO Legal Committee and as a Visiting Professor at WMU. Dr Mbiah received his PhD degree from WMU in 2011.

Regarding the annual student awards, the Chancellor’s Medal for Academic Excellence for the MSc in Maritime Affairs 2019 in Malmö was awarded to Ms Carol Jaimy Schroeder from Namibia, for the Dalian MSc Programme to Ms Li Yan from China, and for the Shanghai MSc Programme to Ms Li Manxi from China. The C P Srivastava Award for International Fellowship was awarded to Mr Luis Miguel Colmenares Hernández from Venezuela. Ms Yvette de Klerk from South Africa received the Secretary-General’s Prize for the best dissertation. Mr Nishank Sharma from India received the Schlüter Foundation Dissertation Prize for an outstanding dissertation in the field of Shipping and Marine Environmental Protection. Mr Mohammad Samsul Mannan from Bangladesh received the Lloyd’s Maritime Academy Dissertation Prize. Mr Gerardo Daniele Miscuzzi from Italy received the Lloyd’s Maritime Academy Distance Learning Prize. Mr Shi Quiang from China Hong Kong SAR received the Richard Charvet Scholarship for the Postgraduate Diploma in law, and Mr Duncan Cuthill from the United Kingdom received the Richard Charvet Scholarship for the Master of Laws.