Announced today by Emanuele Grimaldi, Managing Director of Grimaldi Group, at the opening of the international summit that gathered 700 top players in finance, transport, logistics and ports. 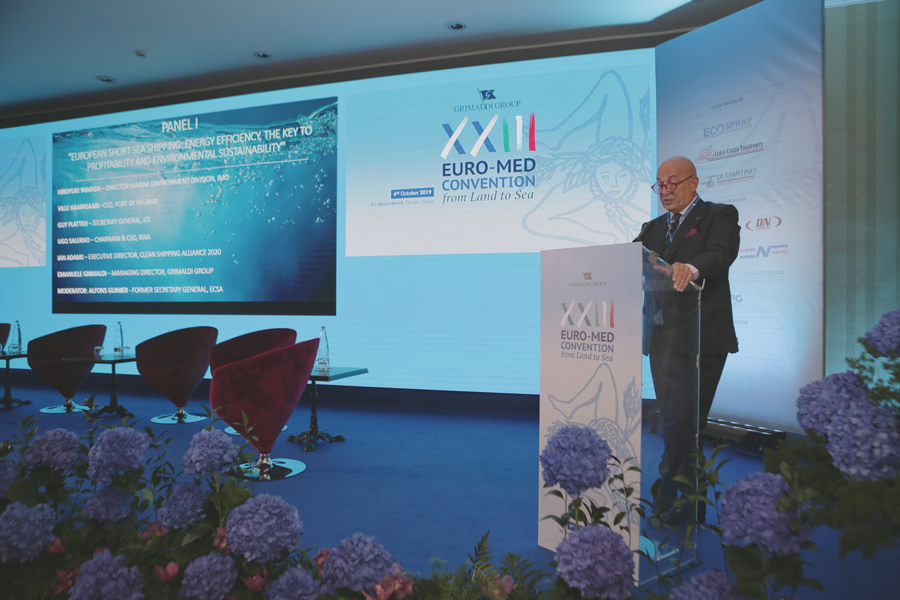 Giardini Naxos, 4th October 2019 – Today the XXIII Euromed Convention From Land to Sea, the international summit organized by the Grimaldi Group, held this year in Giardini Naxos at the RG Naxos Hotel, has officially started. 700 top players in finance, transport, logistics and ports sectors, coming from every part of the world, participate in the event, in order to discuss on topics of global interest, such as energy efficiency and environmental sustainability, opportunities for further development of intermodality and short sea transport.

In his opening speech, the Managing Director Emanuele Grimaldi confirmed that the present of the Grimaldi Group is green and that the long term goal is transporting freight and passengers with zero emissions. For this purpose, during the last year the Group programmed large investments in Research & Development, thus confirming its strong commitment in decarbonisation for the protection of the planet.

The first priority of the Grimaldi Group is the compliance with the IMO 2020 regulation on fuels, that will change the maritime transport globally: as from 1 January 2020, the sulphur content of ship emissions shall be less than 0.5%.

For this reason, 101 ships out of a 130-strong fleet will be soon equipped with exhaust gas cleaning systems, while from January 2020 the remaining ships will be powered with clean fuel. The increasing use of more efficient scrubbers able to filter microplastic particles and heavy metals at sea is also under study.

The objective is the almost total abatement of sulphur and particulate emissions in the air, as evidenced also with the adherence of the Group to the SAILS Charter (Sustainable Actions for Innovative and Low-impact Shipping) as the first Italian signatory.

Among other investments, the fleet of the Grimaldi Group will widen with further 17 greenships.

12 ships of the GG5G class for the transport of rolling units, as well as 5 PCTCs (Pure Car & Truck Carrier) have been already ordered and will be the most ecofriendly ro/ro ships worldwide.

Moreover, a tender has been launched for the construction of 2 ro/pax ships of the Superstar class for the Baltic routes, which will be equipped with the biggest battery packs ever installed on a ship. Moreover, the Group is designing a new Supercruise ship to be deployed in the Mediterranean, which will be equipped with the most advanced technologies for the protection of the environment.

An absolute record of the Grimaldi Group are the first ships in the Mediterranean Sea with zero emissions in port: the two twin flagships Cruise Roma and Cruise Barcelona. Built in 2008, they have been lengthened and refurbished by Fincantieri in Palermo this year. Today both ships are equipped with lythium batteries, to power them during port stopovers without the need to operate their diesel generators, thus achieving zero-emissions in port.

“Energy efficiency is not only a moral obligation in the face of the serious environmental emergency we are experiencing – said Emanuele Grimaldi – It is also the key for the development of the whole international community: intermodal transport is the cleanest and cheapest way of transport, able to promote the growth of the sector. Our engagement for decarbonization allowed us to reach important results: in the last two years the volume of feight transported by the Grimaldi Group has grown by 17%. At the same time, we have significantly reduced fuel consumption as well as sulphur and particulate emissions per mile sailed”.

Opening the summit, Esben Poulsson, Chairman of ICS (International Chamber of Shipping), reminded the role of the Organization which represents 80% of the worldwide shipowning companies with the most important international authorities, like the International Labour Organization, the G7, the United Nations and above all the International Maritime Organization (IMO). “By 2050, gas emissions from ships will have to be halved compared to 2008 levels, on the basis of the agreements signed by the IMO – said Ebsen Poulsson – This will be a real revolution that the maritime sector will face. But it will also be a great opportunity for the global economic growth, which I am sure will be tackled with a proactive attitude”.

About the Grimaldi Group

The Grimaldi Group, headquartered in Naples, operates a fleet of over 130 vessels and employs approximately 16,000 people. Wholly owned by the Grimaldi family, it is a multinational logistics Group specialised in the operation of roll-on/roll-off vessels, car carriers and ferries. It comprises six shipping companies, namely: Grimaldi Deep Sea, operating in the transport of rolling cargo and container on the Atlantic routes and between the Mediterranean and West Africa; Grimaldi Euromed, specialized in the transport of rolling freight in Europe, in the Motorways of the Sea and in the transport of passengers in the Mediterranean with the Grimaldi Lines brand; Atlantic Container Line, which offers transport services for containers and rolling cargo between North America and North Europe; Malta Motorways of the Sea, shipowning company; Minoan Lines, operating in Greek cabotage for the transport of freight and passengers; Finnlines, operating in freight and passengers transport in the North and Baltic Sea.
The maritime connections are the core of an advanced logistics chain, which includes port terminals and road transport companies. The 21 port terminals owned/operated by the Grimaldi Group are located in 12 countries around the world: Italy (Salerno, Monfalcone, Civitavecchia, Catania, Gioia Tauro, Savona Palermo & Livorno), Spain (Barcelona, Valencia and Sagunto), Germany (Hamburg), Sweden (Wallhamn), Finland (Turku & Helsinki), Denmark (Esbjerg), Ireland (Cork), Belgium (Antwerp), Egypt (Alexandria), Cameroon (Douala), Nigeria (Lagos), Benin (Cotonou). Most of these terminals are fitted with Pre-Delivery Inspection (PDI) facilities, warehouses and workshops.