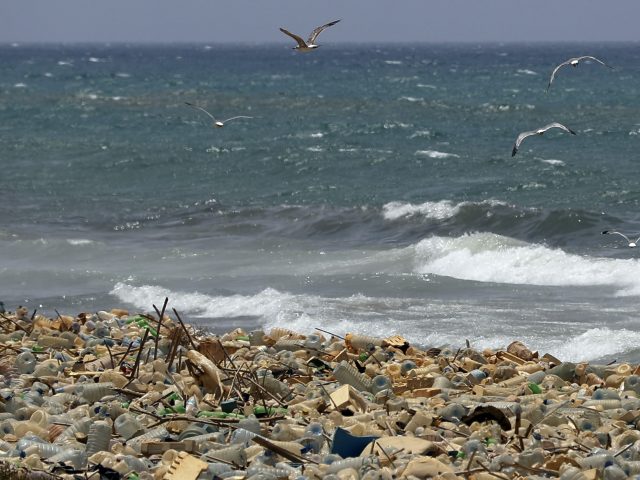 Up to 14 million tons of plastic enters the ocean every year, about the weight of 2 million elephants. An estimated 40% of that falls into the “single-use” category, which means it winds up in the ocean within the same year it was produced.

Scientists still aren’t sure where most of this floating plastic comes from. But a new study provides a partial answer: when it comes to plastic bottles in the Atlantic, the culprit appears to be Chinese merchant vessels that are dumping their garbage overboard.

The researchers behind the study, published in the journal Proceedings of the National Academy of Sciences, examined plastic bottles and other debris that washed up on Inaccessible Island, a remote and uninhabited patch of land in the south Atlantic Ocean.

They discovered that the number of plastic bottles that accumulated on the island had increased by 15% every year in the last 35 years. Most of the bottles that arrived during the researchers’ 72-day monitoring period came from China, and date stamps on those bottles indicated that the majority were manufactured in the last two years.

But for bottles to drift naturally from Asia to this point in the Atlantic would take three to five years, the study authors concluded — which meant they had to be coming from somewhere else.

A lion’s share of the Asian bottles that the researchers collected in 2018 had washed ashore within two years of their date stamps. That means they had to have come from a source closer than mainland China.

The most likely point of origin, the team decided, is Chinese merchant vessels in the Atlantic. The number of Asian cargo vessels traveling in the waters near Inaccessible Island has increased notably since the 1980s. Plus, many of the bottles the team found had been crushed with their tops screwed on, as is customary on ships to save space, according to the lead author of the study, Peter Ryan.

“It’s inescapable that it’s from ships, and it’s not coming from land,” Ryan told AFP. “A certain sector of the merchant fleet seems to be doing that, and it seems to be largely an Asian one.”

This dumping, the authors wrote, is likely “in contravention of International Convention for the Prevention of Pollution from Ships regulations” — laws that aim to minimize accidental or operational pollution from marine vessels.The authors noted that it’s possible some of these Chinese-made bottles could have been exported to — then dumped by — other countries, or sold to ships from other nations. (China is the second largest exporter of water globally.) However, data from the United Nations indicates that the two continents closest to Inaccessible Island, South America and Africa, import very little water. Virtually all bottled water and soft drinks for sale in those regions are manufactured locally, the researchers wrote.

Global production of plastics has increased rapidly during the last 70 years, and continues to grow at around 8% per year. More than 300 million tons of plastic are produced annually worldwide.

Most plastics take hundreds of years to break down. And even then, they just splinter into very small pieces called microplastics, which will likely never biodegrade.

Many people assume that most single-use plastic in the ocean gets dumped into waterways on land, then eventually flows into the ocean. One data survey estimates that 80% of ocean plastics come from land-based sources.

But Ryan and his colleagues say there is little direct evidence for that.

Their results “question the widely held assumption that most plastic debris at sea comes from land-based sources,” the authors wrote.Oceanographer Laurent Lebreton, who is working with the The Ocean Cleanup organization to remove plastic from the Great Pacific Garbage Patch, told AFP that the 80% figure does not apply to the open ocean.