Asian Moon is operated by the Dutch based Charterer NIRINT B.V. since 2015. She provides a regular container and general cargo liner service from EU ports to the Caribbean and Canada. The round trip voyage of approximately 45 days gives my crew the chance to visit interesting countries with different cultures on both sides of the Atlantic Ocean.

For example, the Caribbean Isles are well known as exotic places inviting tourists from the whole World. One of the most attractive islands is Curacao with her capital of Willemstad. Curacao gained independence from the Netherlands but remains in a strong relationship, both economically and culturally.

Willemstad is sometimes known as ‘Little Amsterdam’. The city has the style of an old Dutch town as seen in the architecture of the buildings, forts and bridges. Saint
Anna’s Channel divides Willemstad into two parts – Western Otrabanda and Eastern Punda. Queen Juliana’s Bridge joins both sides. During pilotage, the vessel passes a curved channel and then suddenly enters a ‘Dutch Fairy Tale’. The impression is heightened when you see the pontoon Bridge, which connected both sides of the channel, towards Western quay. Due to a strong and continuous cross current and prevailing Easterly winds, the vessel steers towards Fort Amsterdam on the eastern edge of the entrance. The speed of 8-9 knots has to be maintained to reduce drift to less than 20 degrees. At the distance of 2-3 cables (approximately 550m), the course is sharply adjusted to the middle of channel for safe entry. The Pilot then reduces speed to 5 knots for the channel passage.

There are small ferry boats, yachts and pleasure crafts berthed along both sides of the channel fronts. Huge cruise ships are berthed both outside and inside the channel. Due to the limited space, the distance to the cruise ships can be as little as 12-15m only but the manoeuvering is always smooth, provided by experienced pilots. Most of them studied and obtained
their licenses in the Netherlands.

Cargo operations on the container terminal are quick and efficient followed by the outbound pilotage. Contribution by Captain Vladyslav NIZOV and his Crew on board Asian Moon. 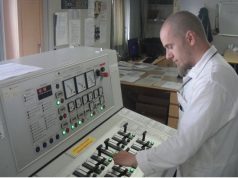 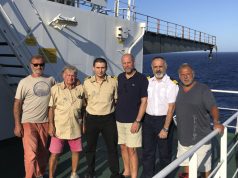 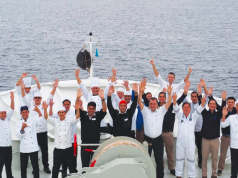