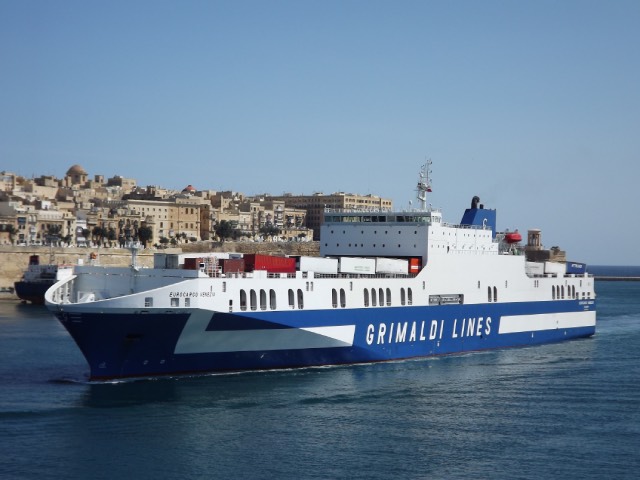 In recent months, the Naples-based Grimaldi Group has proceeded to significantly strengthen its presence in Malta through various initiatives, showing its full commitment in promoting the country’s maritime vocation.

Following the effects of Brexit, Atlantic Container Line (ACL), a Grimaldi Group company, has proceeded to reflag its fleet in the last six months, leaving the Union Jack and opting for the Malta flag. A total of nine vessels of ACL are currently under Maltese flag while another one is due to be added in the next few months. ACL operates the biggest con/ro vessels in the world, offering a liner service between various North European and North American ports for the transport of rolling units and containers.

Moreover, Malta Motorways of the Sea Ltd (MMOS), a Grimaldi Group company, has recently strengthened its fleet with the purchase of two additional vessels: the ro/ro units Eurocargo Catania and Eurocargo Sicilia. Currently, Valletta-based MMOS has a fleet of six modern ro/ro vessels and operates various regular maritime services in the Mediterranean.

Particularly, MMOS runs, in cooperation with the Grimaldi Group, a regular service between mainland Italy (Genoa, Livorno, Salerno and Catania) and Malta, under a Public Service Obligation contract with the Maltese Government, thus guaranteeing the shipment of essential commodities into the country.

With a view of promoting maritime education in Malta, MMOS has a permanent cooperation agreement with MCAST – Maritime Institute for the training of sea cadets onboard its vessels. Hundreds of young Maltese cadets have received training so far, many of whom have also been hired by Grimaldi Group companies.

Finally, in the course of the month, the Grimaldi Group will further strengthen the maritime connections it offers between Italy (Genoa, Livorno, Catania) and Malta. In fact, in the second half of the April, Malta is due to be served with one of the 12 GG5G-class (Grimaldi Green 5th Generation) ro/ro vessels, currently under construction in Asia, four of which already delivered to the Group. A second vessel of the same class will be deployed on the same route at the beginning of June.

The GG5G-class vessels are the biggest short sea ro/ro units in the world as well as the most ecofriendly. They have a length of 238 meters, a beam of 34 meters, a gross tonnage of 67,311 tonnes and a service speed of 20.8 knots. Their loading capacity is twice that of the previous class of ro/ro ships deployed by the Grimaldi Group: each vessel can carry over 500 trailers as well as 180 cars. Their quarter stern ramp allows the loading of freight units weighing up to 150 tons.

At the same speed, the GG5G-class vessels consume the same amount of fuel compared to the previous generation vessels and are therefore able to halve CO2 emissions per unit transported: this was made possible through the adoption of several innovative technological solutions that optimize fuel consumption and ship performance. Moreover, they are equipped with an exhaust gas cleaning system for the reduction of sulphur and particulate emissions.

During port stays, the GG5G-class vessels are capable of cutting emissions to zero by using the electricity stored in mega lithium batteries with a total power of 5 MWh, which are recharged during navigation thanks to shaft generators and 350 m2 of solar panels.

“We are very proud to contribute to strengthening our long affiliation with the Maltese Islands, its people and its industry”, states Emanuele Grimaldi, Managing Director of the Grimaldi Group and Vice-President of the Malta International Shipping Council. “Having been present for over half a century in Malta is a demonstration of our commitment to the wellbeing of this nation whom we intend to serve with increasingly modern and ecofriendly vessels”, concludes Emanuele Grimaldi.