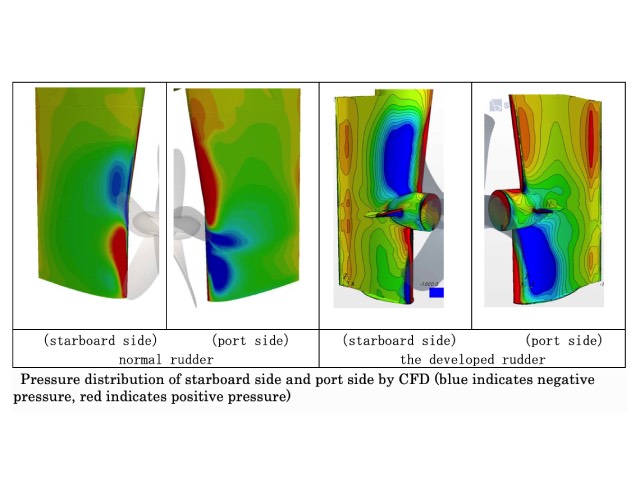 In the development of energy-saving rudder with bulb fins (hereinafter the “developed rudder”), we have enhanced the energy-saving performance and improved horsepower by taking advantage of the steering effect of the rudder of JHC, a specialized manufacturer of high lift rudder such as schilling rudder. The features of the developed rudder are as follows.

1) In order to recover the swirling flow of the propeller, the reaction shape is designed as a high thrust blade section and the rudder horn is also twisted and integrated so as to increase thrust due to the negative pressure on the rudder.

2) By reducing the size of the end plate under the rudder, the resistance is reduced and the propeller swirl flow is also blocked.

3) The large central bulb has a flat front surface to reduce the propeller inflow speed and improve propeller efficiency.

We used JBC (Japan Bulk Carrier) hull, which is open to the public as a general large-sized hull and widely used in various research and development. Generally, it is difficult to improve the horsepower by 4% or more with a normal reaction rudder. However, with the developed rudder, CFD (Computational Fluid Dynamics) showed 5.7% improvement in horsepower and a self-propulsion test in a large towing tank confirmed 5.2% improvement.

The developed rudder has been applied to the slender ship types as well, and an energy-saving effect of 4.4% has been confirmed by CFD. In the future, we plan to conduct a large towing tank test after performing optimization work.

We will continue to improve the efficiency by aiming for a synergistic effect with the torque reduction effect of PBCF for the future installation on actual ships. The developed rudder has been patented. 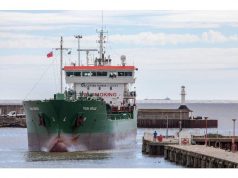 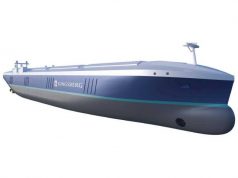 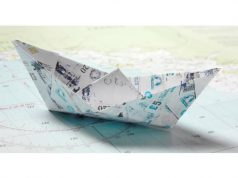